A direct and informative Wordbook of Idiom and Slang which is directed at giving explanation to the meaning of and the correct usage of the Australian English language. There are some words used that may offend as they have converse meanings to other English Speaking countries; however, there is no intent to offend or malign or denigrate anybody. This book is designed to be informative, educational, and full of humor and will give the reader insight to a unique and colorful language.

Aussie Slang is a richly-textured, often ribald world of understatement and laconic humour. This guide aims to do three things; (a) to help the traveller decipher what they hear around them in everyday Australian life, (b) give the causal reader some insight into informal Australian culture, and (c) make a record of some old Australian expressions that are slipping into disuse now that English has become a global language. Readers will recognize both British and American terms in this list. Australian English has absorbed much from these two great languages. For depth of knowledge of their own language, no-body beats the British. Its their language after all. A thousand years in the making, the English language is embedded deep in the DNA of the British. No-one uses their language more skilfully than they do. On the other hand, American English has a creative power that recognizes no boundaries. Americans have taken a very good all-purpose language and extended it in all kinds of directions with new words describing the world as it is today. They do not generally cling to old forms out of respect for tradition. As Winston Churchill observed, Britain and America … two great nations divided by the same language. Australian English sits comfortably in the space between the two. Australian English began in the early days of settlement as English English with a healthy dash of Celtic influence from the many Scots, Irish and Welsh settlers who came to Australia. Large numbers of German settlers also came in the 1800's,and their influence on the language is also clearly evident. For over a hundred years, Australia developed in splendid isolation its unique blend of English, tempered by the hardships of heat and cold, deluge and drought, bushfires and cyclones. The harsh environment united people in a common struggle to survive. People helped each other. Strong communitarian loyalties were engendered. It is from this that the egalitarian character of Australia evolved. There is a strong emphasis on building a feeling of solidarity with others. Strangers will call each other "mate" or "luv" in a tone of voice ordinarily reserved for close friends and family in other parts of the world. Everyone was from somewhere else, and no-one was better than anyone else. A strong anti-authoritarian attitude became deeply embedded in Australian English. This was mainly directed towards their British overlords who still ran the country as a profitable colony. The Australian sense of humour is generally understated, delivered with a straight-face, and is often self-deprecating in nature. No-one wants to appear to be “up themselves”. Harsh or otherwise adverse conditions had to be met without complaint, so when discussing such conditions, it was necessary to do so with laconic, understated humour. Anyone not doing so was deemed a “whinger” (win-jer).Following World War II the American influence came increasingly to influence Australian culture and therefore the language. No-one is better at selling their popular culture to the world than the United States of America. Their pop culture is a beguiling instrument of foreign policy, so pervasive and persuasive it is. Young Australians enthusiastically embraced American culture, and since the 1940's the old established British language and customs have become blended with the American. If Australian English has a remarkable quality, it is the absence of regional dialects. It is spoken with relative uniformity across the entire nation. Brisbane on the East coast is a 4,300 kilometre (2,700 mile) drive from Perth on the West coast, yet there is little discernible linguistic difference between the two places compared with the difference, for example between Boston and San Francisco in the US. Nowhere else in the world do we see such linguistic uniformity across large distances.

The ever popular and thoroughly entertaining, Aussie Slang Dictionary is back to help you decipher and speak the true local language. Full of dazzling definitions from true-blue Aussies, you'll never be lost for words with this collection of colourful sayings. From 'aerial ping-pong' (AFL) to 'on the wrong tram' (to be following the wrong train of thought) and finishing up with some 'verbal diarrhoea' (never-ending blather), your mind will be brimming with useful (and not so useful!) sayings for your next run-in with a true Aussie character.

This dictionary brings together a colourful collection of colloquialisms from Down Under, including humorous rhyming slang, inventive insults and comical curses. Celebrating a distinctive and often irreverent language, Australian Slangis a ripper of a read that will delight visitors from OS, as well as true-blue Aussie blokes and sheilas. Read this book to discover the meaning behind perplexing Australian discourses such as this one- G'day mate! How've ya been, you old bastard? Take a butchers at that galah playing aerial ping-pong on the telly. He's about as useful as a one-legged man in an arse-kicking competition. The drongo'll get the spear if he doesn't pull his socks up.

Hello or G'day.English to Australian Slang Dictionary.Enjoy over 1001 + Aussie slang words A to Z.Easy to find words and phrase's to impress your friends in Australia and Overseas.After studying this dictionary and working on a couple other things.Maybe you can pass as an Aussie in the Big Smoke.EnjoyHoorooMr Bennett Books

An ideal book for those interested in things and people Australian, as well as travellers to Australia.

Covering many unique—and sometimes peculiar—Australian slang phrases and words, this lighthearted guide shares the etymological history of almost 1,000 items from Australian-English lingo. The book includes how “bloody” became an all-purpose swear word, why “bludger” means a lazy person, the origin of “stone the crows,” and what exactly defines “dangle the dunlops,” “possum knockers,” and “molly-dooker,” among other colorful words and phrases. Entertaining and informative, this offbeat book will expand knowledge and ensure laughs.

The Essential Lingo Dictionary is a warts-and-all look at the notoriously hilarious (and occasionally a little bit naughty) canon of Australian slang words and phrases, casting light on the quirky, intriguing and often bizarre Australian Aussie language. A must-have for every bookshelf! If you have wondered why his girlfriend is a ‘Sheila’ even though her name is Sophia, or why your colleagues in Melbourne’s suburbs are said to live ‘beyond the black stump’, then this book is for you. The author, John Miller, has been a journalist for over thirty-five years and is passionate about Australia’s history and heritage. As well as making extensive use of written references to compile this book, John interviewed Australians from all walks of life — from outback characters to school kids — to ensure he captured every nuance of Australia’s unique language as it is spoken today.

Now available in a fourth, revised, and greatly expanded edition, A Dictionary of Australian Colloquialisms records the ingenuity of the Australian vernacular and provides a unique insight into Australian life and culture. This well-known dictionary, first published in 1978, offers the first and the most recent colloquial coinages. Words and idioms are drawn from a wide range of historical and contemporary sources--chiefly newspapers, magazines and novels--and each entry is shown in context, with origins and derivations.

A collection of Australian slang expressions with generally broad and colourful explanations. Many are in common use in our language but with less colloquial meaning. Many are dictionary words while others are arranged as expressions or phrases. Some are accompanied by graphics by the cartoonist Andrew Fyfe. The collection is arranged in alphabetical order. The author is well known for his television character roles and has written two other books, 'The Aussie Slang Dictionary' and 'Don't Come the Raw Prawn'.

With more than 7,000 definitions, this book provides a definitive guide to the use of slang today. It deals with drugs, sport and contemporary society, as well as favourite slang topics such as sex and bodily functions. In this convenient paperback edition of the highly acclaimed Dictionary of Contemporary Slang, language and culture expert Tony Thorne explores the ever-changing underworld of the English language, bringing back intriguing examples of eccentricity and irreverence from the linguistic front-line. "Thorne is a kind of slang detective, going down the streets where other lexicographers fear to tread." Daily Telegraph

Edited by Gary Simes, Australian Underworld Slang contains two previously unpublished glossaries of Australian prison and underworld slang compiled in the 1940s and 1950s. The first was compiled in 1944 by Ted Hartley, a conscientious objector imprisoned for his political beliefs. On Hartley's release, the novelist Kylie Tennant asked him to produce the glossary to assist her in the writing of a novel about prisoners. The glossary then lay forgotten and unrecognized in the National Library until Gary Simes's fortuitous discovery of it. The second glossary was compiled by a prisoner calling himself `35', whose identity has never been divulged. The `Argot', as it was called, was revised by `35' in 1975, but this edition has not been located. Dr Simes combines the glossaries and draws on the full resources of the OED and the AND and his own formidable database of underworld and sexual language to place them in a broader lexicographical and historical context. He also contributes a long and important essay on the criminal literature since the Middle Ages. 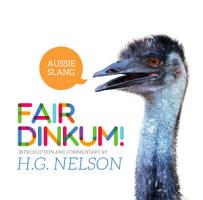 Australian slang unites the true blue and the dinky-di and separates the cheeky little possums from the happy little Vegemites. When we use slang, we’re connecting with the diggers in the villages of France ordering a vin blanc (‘plonk’) and the Indigenous Dharug-speakers of Sydney locating one another with a familiar cry (‘within cooee’). In this attractive and educational new pictorial guide, readers will be ably led through the world of Aussie slang by the great H.G. ‘battered sav’ Nelson.

Third Language Dictionary is a guide to everyday language that is peculiar to and used by Australian folks from all walks of life no matter what or who they are or the level of success, education, credence, or place in society they have attained.