When it comes to Texas honky-tonk, nobody knows the music or the scene better than Johnny Bush. Author of Willie Nelson's classic concert anthem "Whiskey River," and singer of hits such as "You Gave Me a Mountain," "Undo the Right," "Jim, Jack and Rose," and "I'll Be There," Johnny Bush is a legend in country music, a singer-songwriter who has lived the cheatin', hurtin', hard-drinkin' life and recorded some of the most heart-wrenching songs about it. He has one of the purest honky-tonk voices ever to come out of Texas. And Bush's career has been just as dramatic as his songs—on the verge of achieving superstardom in the early 1970s, he was sidelined by a rare vocal disorder that he combated for thirty years. But, survivor that he is, Bush is once again filling dance halls across Texas and inspiring a new generation of musicians who crave the authenticity—the "pure D" country—that Johnny Bush has always had and that Nashville country music has lost. In Whiskey River (Take My Mind), Johnny Bush tells the twin stories of his life and of Texas honky-tonk music. He recalls growing up poor in Houston's Kashmere Gardens neighborhood and learning his chops in honky-tonks around Houston and San Antonio—places where chicken wire protected the bandstand and deadly fights broke out regularly. Bush vividly describes life on the road in the 1960s as a band member for Ray Price and Willie Nelson, including the booze, drugs, and one-night stands that fueled his songs but destroyed his first three marriages. He remembers the time in the early 1970s when he was hotter than Willie and on the fast track to superstardom—until spasmodic dysphonia forced his career into the slow lane. Bush describes his agonizing, but ultimately successful struggle to keep performing and rebuild his fan base, as well as the hard-won happiness he has found in his personal life. Woven throughout Bush's autobiography is the never-before-told story of Texas honky-tonk music, from Bob Wills and Floyd Tillman to Junior Brown and Pat Green. Johnny Bush has known almost all the great musicians, past and present, and he has wonderful stories to tell. Likewise, he offers shrewd observations on how the music business has changed since he started performing in the 1950s—and pulls no punches in saying how Nashville music has lost its country soul. For everyone who loves genuine country music, Johnny Bush, Willie Nelson, and stories of triumph against all odds, Whiskey River (Take My Mind) is a must-read.

First Published in 1999. Routledge is an imprint of Taylor & Francis, an informa company.

The war is over, but the fight has just begun in this western in Ralph Compton's USA Today bestselling series. They came back from the war, and their land was gone. The Texas soil they’d nourished with years of backbreaking work had been snatched away. And in a moment of fury at this Yankee plunder, Mark Rogers and Bill Harder cut down a pair of tax collectors…and wound up behind bars in Fort Worth. But then the former Confederate soldiers are offered a choice: they can face their sentences—or infiltrate a gang of whiskey runners who’ve been evading the law between St. Louis and Fort Smith. If they succeed, they’ll gain their freedom…and their confiscated land. But when they meet up with Wolf Estrello and his fellow bandits, they just might wish they’d taken their chances with the firing squad… More Than Six Million Ralph Compton Books In Print!

This highly accessible and enjoyable guide is full of practical and fascinating information about how to enjoy whisky. All whisky styles are covered, including (just whisper it) blends. Along the way a good few myths are exploded, including the idea that whisky has to be taken neat. In 'What to Drink', Dave Broom explores flavour camps - how to understand a style of whisky - and moves on to provide extensive tasting notes of the major brands, demonstrating whisky's extraordinary diversity. In 'How to Drink', he sets out how to enjoy whisky in myriad ways - using water and mixers, from soda to green tea; and in cocktails, from the Manhattan to the Rusty Nail. He even looks at pairing whisky and food. In this spirited, entertaining and no-nonsense guide, world-renowned expert Dave Broom dispels the mysteries of whisky and unlocks a whole host of exciting possibilities for this magical drink.

Psychiatry PRN is a ground-breaking new resource for students of psychiatry. It majors on providing a practical introduction to the subject, notably clinical skills, together with preparatory material for examinations. The book will boost the confidence of any student approaching their psychiatry placements or examinations.

International Perspectives on Autoethnographic Research and Practice is the first volume of international scholarship on autoethnography. This culturally and academically diverse collection combines perspectives on contemporary autoethnographic thinking from scholars working within a variety of disciplines, contexts, and formats. The first section provides an introduction and demonstration of the different types and uses of autoethnography, the second explores the potential issues and questions associated with its practice, and the third offers perspectives on evaluation and assessment. Concluding with a reflective discussion between the editors, this is the premier resource for researchers and students interested in autoethnography, life writing, and qualitative research.

Kentucky Bourbon and Tennessee Whiskey serves as a guide to regional tourists and to armchair aficionados highlighting the major distilleries and up and coming micro distilleries, largely along the I-65 through Bluegrass Parkway Whiskey and Bourbon Corridor from the Alabama border through Tennessee and across Kentucky. In the course of that tour, readers can explore the history of spirit production in the region and learn to nuances of tasting. Included are more than 50 cocktail recipes from the distillers themselves and well-known mixologists from the region. 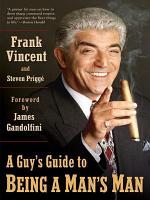 These days, it’s harder than ever to know how to act like a real man. We’re not talking about the touchy-feely, ultra-sensitive, emotion-sharing, not-afraid-to-cry version of manhood that Oprah and Dr. Phil have been spouting for years. We’re talking about the though, smart, confident, charming, classy, all-around good fella that upholds the true ideal of what is known as “a man’s man.” Now, renowned actor and true-life man’s man Frank Vincent, famed for his unforgettable tough-guy roles in such classic films as Raging Bull, Goodfellas and HBO’s The Sopranos, is going to show how any man can be all that he can be in love, work, play, and life. Everything you need to know is covered here, including, getting the best women by being the best man, dressing like a champ and taking on the world, winning big money and big respect in Las Vegas, selecting, smoking, and savoring a great cigar, and much more. If you want to learn how to be a man’s man, you gotta learn from a man’s man. And with the great Frank Vincent vouching for you, you’ll be on your way to getting everything you ever wanted outta life.

There are literary reminiscences that reek of self-congratulation over the authors’ proximity to famous movers and shakers. Andy Bernstein’s California Slim aspires to far more than that—and achieves it. Andy was there, at the onset of the post-’50s revolution that, as a beat poet once put it, roared as it ripped the threadbare fabric of an age. Andy was no distant, casual observer during the tumultuous ’60s and ’70s; he was at the heart of the maelstrom, and writes about it with candor, humor, and originality. The story begins, for God’s sake, with Andy and his then unknown banjo teacher, a young Jerry Garcia, fingerpicking in a back room at Dana Morgan’s Music Studio in Palo Alto in 1962. A skinny six-foot-seven-inch Jewish kid (later known as “California Slim”), Andy divided his time between the usual adolescent interests and music, for which he would go on to provide a capital M by promoting and staging concerts throughout the San Francisco Bay Area. His Palo Alto nightclub, Homer’s Warehouse, across the street from the Stanford University campus, brought revolutionary musicians (among them, Sonny Terry and Brownie McGhee) to young sensibilities hungry for new driving rhythms and thought-provoking lyrics. The early chapters of this book set the stage for Andy’s eventual hooking-up with Willie Nelson and his Family—which felt, Andy said, “like reading a really good book that I couldn’t put down.” That feeling led directly, if gradually, to California Slim. And you, dear reader, won’t be able to put it down, either. —Tony Compagno

"The Bar Belle" was released in late 2011 and included the infamous columns from 2006-2010. A Volume 2 has been in the works ever since, and this book completes the Bar Belle's time at LEO Weekly. It includes her columns from 2011-2014. While she's embarking on bigger and better endeavors and maintains her own independent blog (barbelleblog.com), this collection shows us more of her humble beginnings as the leading lady of Louisville's nightlife. The Bar Belle tackles everything from sweet Kentucky bourbon to Derby Dos and Don'ts to hangover cures to Santa Claus. If you've ever enjoyed a drink in a bar, you will find her stories humorous and highly relatable.

This vivid, prophetic book on China’s magnetic attraction to the West is the perfect introduction to China in the eighties.

Marshall Chapman knows Nashville. A musician, songwriter, and author with nearly a dozen albums and a bestselling memoir under her belt, Chapman has lived and breathed Music City for over forty years. Her friendships with those who helped make Nashville one of the major forces in American music culture is unsurpassed. And in her new book, They Came to Nashville, the reader is invited to see Marshall Chapman as never before--as music journalist extraordinaire. In They Came to Nashville, Chapman records the personal stories of musicians shaping the modern history of music in Nashville, from the mouths of the musicians themselves. The trials, tribulations, and evolution of Music City are on display, as she sits down with influential figures like Kris Kristofferson, Emmylou Harris, and Miranda Lambert, and a dozen other top names, to record what brought each of them to Nashville and what inspired them to persevere. The book culminates in a hilarious and heroic attempt to find enough free time with Willie Nelson to get a proper interview. Instead, she's brought along on his raucous 2008 tour and winds up onstage in Beaumont, Texas singing "Good-Hearted Woman" with Willie. They Came to Nashville reveals the daily struggle facing newcomers to the music business, and the promise awaiting those willing to fight for the dream. Co-published with the Country Music Foundation Press

Follow Gerry Wood on his journey with country music's biggest stars, featuring Dolly Parton, Willie Nelson, Shania Twain and many more familiar names in the industry. Tales from Country Music will take you backstage and behind the scenes with some of your favorite country music singers.