On January 6, 1975, Nottingham Forest were thirteenth in the old Second Division, five points above the relegation places and straying dangerously close to establishing a permanent place for themselves among football's nowhere men. Within five years Brian Clough had turned an unfashionable and depressed club into the kings of Europe, beating everyone in their way and knocking Liverpool off their perch long before Sir Alex Ferguson and Manchester United had the same idea. This is the story of the epic five-year journey that saw Forest complete a real football miracle and Clough brilliantly restore his reputation after his infamous 44-day spell at Leeds United. Forest won the First Division championship, two League Cups and back-to-back European Cups and they did it, incredibly, with five of the players Clough inherited at a club that was trying to avoid relegation to the third tier of English football. I Believe In Miracles accompanies the critically-acclaimed documentary and DVD of the same name. Based on exclusive interviews with virtually every member of the Forest team, it covers the greatest period in Clough's extraordinary life and brings together the stories of the unlikely assortment of free transfers, bargain buys, rogues, misfits and exceptionally gifted footballers who came together under the most charismatic manager there has ever been.

I want my life to be read like a good story—a story that is eventful. I want my life to be so much more than just survival. I will not feel cheated on my deathbed and think, Is this all there is? I would hope you feel the same. I would also like to be the author of my own story. This is the exact opposite of being a victim, who must live a live authored by others. Statistics show that we grow older and older, but I question the content in many people’s lives. It’s not the years in your life that count; it’s the life in your years! Many people live their lives based on old hypothesis which have been proven wrong. Through new neuroscience you will be guided to get an understanding on how the body and mind cooperates, so you can be able to fulfill your wishes and desires. Join me on a journey towards how you can create your own future.

Canada's most famous adman spills a career's worth of marketing secrets, so anyone can compete with the best in their business--whatever that business might be. Big companies spend a fortune marketing their wares and services. Can yours? Invariably people ask advertising veteran and CBC Radio host Terry O'Reilly one question more than any other: How does a little business compete with the big guys? After decades at the helm of an award-winning advertising production company, and over a decade exploring the art and science of marketing for CBC Radio, O'Reilly delivers all the answers they--and anyone with something to sell--ever wanted to know. Following his bestselling Age of Persuasion, O'Reilly collects a lifetime of marketing wisdom into an indispensable guide to competing for your customers' attention. From understanding what business you're really in and foregoing the extra mile in favour of the extra inch, to the benefits of counterintuitive thinking and knowing an opportunity when you see one, This I Know will help anyone understand the fundamentals of good marketing strategy and building the relationships that turn good marketing into great results, no matter how big or small your budget. 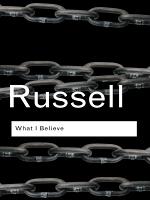 Along with Why I Am Not a Christian, this essay must rank as the most articulate example of Russell's famed atheism. It is also one of the most notorious. Used as evidence in a 1940 court case in which Russell was declared unfit to teach college-level philosophy, What I Believe was to become one of his most defining works. The ideas contained within were and are controversial, contentious and - to the religious - downright blasphemous. A remarkable work, it remains the best concise introduction to Russell's thought.

I Wasn’t Dead When I Wrote This is a recipient of the QED Seal, which stands for Quality, Excellence, Design for ebooks and applications. Perhaps the greatest gift we receive when we grow older is the gift of wisdom. When conversing with our children of those younger than us we might find ourselves giving advice and thinking, "If only I knew that when I was your age!" This is certainly the case for youth minister Lisa-Marie Calderone-Stewart--but it is especially noteworthy because this book was written in her final months before dying of cancer. After thirty years of working with teens, Calderone sums up a lifetime's worth of the best practical advice she has given and received for young people to be happy and spirituality strong in I Wasn't Dead When I Wrote This. Calderone acknowledges that ones teenage years are formative in shaping his or her attitudes and soul-habits, but too often teens look to contemporary culture and acquaintances to develop the ways they deal with life's curveballs. She reflects upon painful periods of time in her youth--such as the time she was the only student in class who had receved just one Valentine and the moment she overhead her parents discussing how much she had changed as a teenager and how they felt they had "lost her." It was through difficult but relatable experiences such as these that she learned the lessons on how to best avoid falling apart when life becomes challenging. It is never too late to change your life or shape someone else's--as Calderone does just that with this honest, heartfelt perspective on living written a few months dying.

This volume addresses the promise and peril of post-9/11 interfaith trialogue. In fifteen clearly written and insightful essays, distinguished scholars of different faiths and divergent world views guide readers toward an informed understanding of the role of religion and the basic teachings of Judaism, Christianity, and Islam in the aftermath of the September 11 terror attacks on the United States. Acknowledging commonalities, these essays also shed light on the essential differences among the teachings of the Abrahamic traditions and raise pivotal questions regarding humanity's future: What prompted the carnage? What has changed since then? What remains to be achieved? Dispelling ignorance about the religious other is a necessary but only a first step toward achieving a durable and effective trialogue. In an increasingly perilous and interconnected world where the effects of globalization are yet to be fully recognized, interfaith trialogue holds out the hope of genuine movement toward a more peaceful coexistence.

Investigates price rises in quinidine and quinine in relationship to market factors and alleged attempts of a Netherlands cartel and West German companies to control world supply and prices.