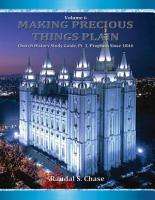 Church History Study Guide, Pt. 3: Latter-Day Prophets Since 1844. This volume is the third of three on Church History and the Doctrine and Covenants. It covers Church history during the administration of all of its Prophet-Prophets since Joseph Smith. It begins with the succession of the Apostles after Joseph Smith?s martyrdom, the building of the Nauvoo Temple, and the trek to the west of the Latter-day Saint pioneers. We follow them through Iowa, Winter Quarters, and on to Utah. We witness the colonization of the state of Deseret, while the rest of the country suffered from Civil War. Then we follow events through the administrations of all of the 19th-Century, 20th-Century, and 21st-Century prophets from John Taylor to Thomas S. Monson. We become familiar with the early lives, missions, marriages, and callings of each of these prophets, seeing how the Lord prepared them for the particular time that they led the Church. We finish with a look toward the future as we await the Second Coming of our Lord. The cover features a beautiful photograph of the Salt Lake Temple, taken at dusk during the Christmas season from the roof of the Joseph Smith Memorial Building.

The volumes in this set, originally published between 1964 and 2002, draw together research by leading academics in the area of higher education, and provide a rigorous examination of related key issues. The volume examines the concepts of learning, teaching, student experience and administration in relation to the higher education through the areas of business, sociology, education reforms, government, educational policy, business and religion, whilst also exploring the general principles and practices of higher education in various countries. This set will be of particular interest to students and practitioners of education, politics and sociology.

Originally published in 1988 Religious Higher Education in the United States is a selected bibliography of sources addressing how religion has changed and affected education in the United States. This volume attempts to address the problems currently facing religious institutions of higher education, covering government aid and the regulation of religious colleges and universities in the US. 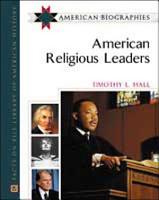 Provides biographical information on more than 270 individuals important to the religious community, having dedicated their lives to religious teaching in various forms, such as evangelism, founding schools and debating the relationship between church and state.

Mormonism is one of the fastest growing religions in the world. For those who have wondered in what specific ways Mormonism differs from the Christian faith, Mormonism 101 provides definitive answers, examining the major tenets of Mormon theology and comparing them with orthodox Christian beliefs. Perfect for students of religion and anyone who wants to have answers when Mormons come calling.

Winner of the Herbert Feis Award from the American Historical Association and named one of the best religion books of the year by Publishers Weekly, D. Michael Quinn's Same-Sex Dynamics among Nineteenth-Century Americans has elicited critical acclaim as well as controversy. Using Mormonism as a case study of the extent of early America's acceptance of same-sex intimacy, Quinn examines several examples of long-term relationships among Mormon same-sex couples and the environment in which they flourished before the onset of homophobia in the late 1950s.

Mormonism is one of the few homegrown religions in the United States, one that emerged out of the religious fervor of the early nineteenth century. Yet, members of the Church of Jesus Christ of Latter-day Saints have struggled for status and recognition. In this book, W. Paul Reeve explores the ways in which nineteenth century Protestant white America made outsiders out of an inside religious group. Much of what has been written on Mormon otherness centers upon economic, cultural, doctrinal, marital, and political differences that set Mormons apart from mainstream America. Reeve instead looks at how Protestants racialized Mormons, using physical differences in order to define Mormons as non-White to help justify their expulsion from Ohio, Missouri, and Illinois. He analyzes and contextualizes the rhetoric on Mormons as a race with period discussions of the Native American, African American, Oriental, Turk/Islam, and European immigrant races. He also examines how Mormon male, female, and child bodies were characterized in these racialized debates. For instance, while Mormons argued that polygamy was ordained by God, and so created angelic, celestial, and elevated offspring, their opponents suggested that the children were degenerate and deformed. The Protestant white majority was convinced that Mormonism represented a racial-not merely religious-departure from the mainstream and spent considerable effort attempting to deny Mormon whiteness. Being white brought access to political, social, and economic power, all aspects of citizenship in which outsiders sought to limit or prevent Mormon participation. At least a part of those efforts came through persistent attacks on the collective Mormon body, ways in which outsiders suggested that Mormons were physically different, racially more similar to marginalized groups than they were white. Medical doctors went so far as to suggest that Mormon polygamy was spawning a new race. Mormons responded with aspirations toward whiteness. It was a back and forth struggle between what outsiders imagined and what Mormons believed. Mormons ultimately emerged triumphant, but not unscathed. Mormon leaders moved away from universalistic ideals toward segregated priesthood and temples, policies firmly in place by the early twentieth century. So successful were Mormons at claiming whiteness for themselves that by the time Mormon Mitt Romney sought the White House in 2012, he was labeled "the whitest white man to run for office in recent memory." Ending with reflections on ongoing views of the Mormon body, this groundbreaking book brings together literatures on religion, whiteness studies, and nineteenth century racial history with the history of politics and migration.

What do Americans think about Mormons - and why do they think what they do? This is a story where the Osmonds, the Olympics, the Tabernacle Choir, Evangelical Christians, the Equal Rights Amendment, Sports Illustrated, and even Miss America all figure into the equation. The book is punctuated by the presidential campaigns of George and Mitt Romney, four decades apart. A survey of the past half-century reveals a growing tension inherent in the public's views of Mormons and the public's views of the religion that inspires that body. 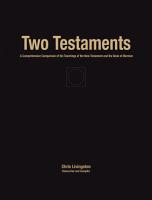 Two Testaments: A Comprehensive Comparison of the Teachings of the New Testament and the Book of Mor-mon is a study of the theology of the New Testament and the Book of Mormon ("the two testaments") that proves and shows that their teachings and doctrines are the same--a singularity! As far as can be determined, this is the first comprehensive comparative study of the theology of the two testaments. In addition to providing knowledge absolute that the theology in them is the same, Two Testaments is a spiritual guidebook provid-ing intelligence unsurpassed regarding the purpose of life, if one chooses to pursue it. The two testaments are God's proclamation, blessing, and challenge to the world. They proclaim that the fulness of the gospel of Jesus Christ is destined to revolutionize and civilize the world by bringing forth and establishing universal equality, peace, prosperity, and love. That which God, in His infinite state, has chosen for us, in our finite state, to understand about Him, the nature of reality, and His purposes for us is presented in the two testa-ments. The mission of Two Testaments is to help us prepare to meet our Creator.

The information in this book goes much deeper than the unveiling of Mitt Romney's political record. For the first time in history, we could see a Mormon President at the helm. Do you have any idea what this possible next President believes? Why should his religious beliefs matter to you? When you get through Part I of this book, these questions will be answered. This is NOT a Kennedy Catholic moment. Mitt Romney's beliefs and convictions are so uncanny that you will most assuredly question his judgment to be in charge of the highest office in the land. If Part I does not shake you, Part II will, by exposing the reality of what Romney has "done" in his political career, versus the conservative faCade that we are led to believe. Will his rhetoric match his deeds as President? One look at his record herewith will cause great concern. Now that the 2012 election is over, this book is very important because there will be another Mormon running for the White House and Part I of this book applies to any person running for public office (or the Presidency) who is deceived through Mormonism, and what it can mean to the citizens of our great nation. THERE IS A MORMON PLAN FOR AMERICA and the Mormon Church will unceasingly and relentlessly fight to get as many Mormons placed into all Government offices, including, yet again, The Office Of The Presidency, to fulfill its mission to rule, hand and hand with Jesus Christ, as the Government of Mormonism throughout the entire world.

This book contains fifteen essays, each first presented as the annual Tanner Lecture at the conference of the Mormon History Association by a leading scholar. Renowned in their own specialties but relatively new to the study of Mormon history at the time of their lectures, these scholars approach Mormon history from a wide variety of perspectives, including such concerns as gender, identity creation, and globalization. Several of these essays place Mormon history within the currents of American religious history--for example, by placing Joseph Smith and other Latter-day Saints in conversation with Ralph Waldo Emerson, Nat Turner, fellow millenarians, and freethinkers. Other essays explore the creation of Mormon identities, demonstrating how Mormons created a unique sense of themselves as a distinct people. Historians of the American West examine Mormon connections with American imperialism, the Civil War, and the wider cultural landscape. Finally the essayists look at continuing Latter-day Saint growth around the world, within the context of the study of global religions. Examining Mormon history from an outsider's perspective, the essays presented in this volume ask intriguing questions, share fresh insights and perspectives, analyze familiar sources in unexpected ways, and situate research on the Mormon past within broader scholarly debates. 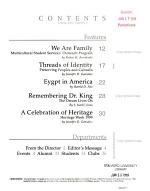