The World Trade Organizations Doha Round of trade talks has been plagued by a lack of concrete progress toward establishing a fair and harmonious agricultural trading system. Because the results of the Doha Round could have far-reaching implications for the trade and economic prospects of developing countries in the twenty-first century, it is critical for these countries to fully understand the issues involved in the negotiations on agriculture. However, there has been no authoritative analysis of the rules and modalities on which governments of developing countries can rely. This book, coauthored by an insider to the trade talks that led to the establishment of the WTO, fills this gap. The volume begins with a detailed analysis of the provisions of the WTOs Agreement on Agriculture and the modalities of the negotiations. It examines the implementation experience of key members of the WTO, then traces the developments in the negotiations up to the recent impasse. In light of these considerations, and on the basis of a case study of India, the authors propose various elements of a negotiating position and strategy for developing countries. The authors offer tough but realistic recommendations regarding tariffs, market access, treatment of sensitive or special products, and other aspects of international trade. This book will be of particular interest to researchers and practitioners as well as students seeking in-depth knowledge of the recent history of agricultural trade talks.

The 3rd Ministerial Conference of the World Trade Organization (WTO) at Seattle was not able to launch a new and comprehensive round of multilateral trade negotiations, but it is expected that in the coming years the WTO will be the forum of these negotiations, commonly referred to as the Millenium Round. Developing countries are currently greatly involved in the WTO process and seek active participation in this round. In relation to least developed countries in Africa, and with Ethiopia as country for a case study, the present paper argues that the Agreement on Agriculture, part of the Uruguay Round, has put a system of basic mechanisms into place but not led to significant agricultural trade liberalization. At the same time, a new host of issues have emerged that relate directly or indirectly to food and agriculture. The report highlights the various interactions between these subjects from the perspective of Ethiopia.

With the conclusion of the Uruguay Round Agreement on Agriculture in 1994, agriculture has for the first time been integrated into world trade rules and disciplines. WTO Members have made a commitment to continue the reform process initiated during the Uruguay Round by starting new WTO negotiations on agriculture by 2000. This book combines academic analysis with practical expertise to discuss, in an accessible and systematic way, some of the principal aspects of these agricultural negotiations, and aims to make recommendations for viable and successful negotiating positions in the new WTO talks on agricultural trade. Several expert articles outline the historical and political background of previous negotiations and policy developments in agricultural trade. Others provide an overview of the key issues for the new round of negotiations, including: the Common Agricultural Policy reform in view of the Millennium Round objectives and future enlargement of the European Union; the prospects for negotiations in the areas of market access and export subsidies; and aspects of primary importance for the future of international agricultural trade such as food safety and quality standards, environmental and animal welfare considerations, and issues under dispute in the WTO. The positions of leading actors in the new round of negotiations, including major countries (Japan and the United States), groups of countries (the European Union, the Cairns Group and net food-importing countries) and European farmers are also presented. 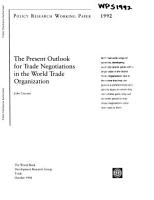 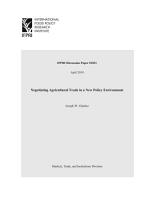 The challenges to meeting the growing global food demand—population and income growth and supply uncertainties complicated by climate change, environmental pressures, and water scarcity—all point to the increasing importance of trade and the need for a more, not less, open trading system. Growth in agricultural trade has been facilitated in part through the rules-based system established under the World Trade Organization (WTO), particularly the Uruguay Round Agreement on Agriculture (AoA). The AoA was implemented in 1995 and brought substantial discipline to the areas of market access, domestic support, and export competition. However, progress since the Uruguay Round has been limited. While the Doha Development Agenda (DDA) was launched with much anticipation in 2001, members failed to reach agreement in July 2008 and the trade agenda in Geneva has since advanced slowly. Despite the best efforts of many, the negotiating intensity seen in late 2007 and 2008 has largely dissipated, in part due to the global recession and the inevitable changes in governments that sometime shift the focus of negotiations. Serious efforts were made to renew the negotiations, but in the end, members have had to be content with harvesting the low-hanging fruit, such as trade facilitation and export competition. Although there have been significant accomplishments, they represent but a small portion of what was on the table during the DDA negotiations. In addition, negotiated settlements on the tougher issues, such as market access and domestic support, have become more difficult to obtain in isolation. The recent experience at the WTO’s Eleventh Ministerial Conference in Buenos Aires highlights the difficulties of reaching a negotiated settlement on domestic support in isolation from, say, market access. Given the increasing importance of trade in addressing food security needs and its critical role in efforts to eliminate malnutrition and hunger by 2030, achieving further progress in the liberalization of world trade is of paramount importance.

Agriculture was a major item on the agenda of the Uruguay Round of multilateral trade negotiations under the auspices of the General Agreement on Tariffs and Trade (GATT), launched in 1986. In this specially commissioned volume the national positions on agriculture taken up by the major players during the course of these negotiations are set out and analysed, country by country, by a team of internationally renowned experts. The editors have selected and ordered the studies to provide a coherent assessment and synthesis of the main issues and areas of controversy raised by the negotiations. Examination of the reasons for the holding of different national perspectives on the issue of agricultural policy and trade reform helps to explain why reaching international agreement in this area of the GATT negotiations has been so elusive.

Essay from the year 2003 in the subject Economics - International Economic Relations, grade: 2,0 (B), Stellenbosch Universitiy (Business School), language: English, abstract: The meeting of WTO Ministers in Cancun/Mexico ended without reaching a consensus in September 2003. But this is not the end of the WTO. The general advisory board of the World Trade Organization is called up for December 2003 to work with the negotiated text of the conference as a discussion basis. Key Issues for the 5 th WTO Round were Agriculture, especially market access and subsidies issues, and Development Issues - over three-quarters of WTO members are developing countries. While the aims of the Doha negotiating round had not changed, the political and economic conditio ns in which the negotiations were taking place had changed enormously in the last year. This included a slowdown in the world economy, currency instability, g eopolitical differences, outstanding trade disputes, and the proliferation of bilateral and regional trade agreements. An agreement on agriculture would have been a precond ition for success for the round of WTO negotiations. Issues were the dismantling of export subsidies, the reduction or removal of market access restrictions that block imports or exports of agrifood products, harmonization of regulations and the reduction of regulatory barriers with respect to phytosanitary standards and genetically- modified organisms, and a re-definition of antidumping to reflect real costs of production (before and after subsidies) in all countries. Another key point of Cancun was the General Agreement on Trade in Services - GATS. Before the round the developing countries called for the implementation of measures agreed under the last Uruguay round of negotiations: m arket access for agricultural and nonagricultural goods, as well as services, rules for governing special and differential treatment, procurement, and interdependence - the linkage of progress on trade negotiations with the resolution of other issues like agriculture and access to pharmaceuticals under TRIPS. 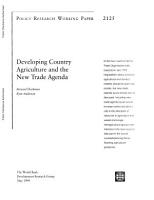 The purpose of this book is to analyze the effects of developed countries' agricultural policies on developing countries. The main focus is on food security, poverty and other topics such as multifunctionality, biotechnology and regional agreements, as an input to policy reform within the World Trade Organization (WTO) trade negotiations. The book arises from a joint project between the Food and Resource Economics Institute in Denmark and the International Food Policy Research Institute in Washington.

Lack of progress toward establishing a fair and harmonious agricultural trading system has plagued the World Trade Organization's Doha Round of trade talks. Because the results of the Doha Round could have far-reaching implications for the trade and economic prospects of developing countries, the trade community requires an authoritative analysis of the rules and modalities of the negotiations. This book, coauthored by an insider to the trade talks that led to the establishment of the WTO, fills this gap.