Jerry Cornelius is an English assassin, physicist, rock star, and messiah to the Age of Science. Mainstay of the infamous and influential magazine NEW WORLDS and star of some of Moorcock's most celebrated novels, here are the short stories which made his name. Set in a shifting, fluid version of the counter-culture 1960s, the adventures of Jerry Cornelius were among the most prominent 'New Wave' SF books. Jerry Cornelius is one of the most remarkable and distinctive characters in Moorcock's work, and his time-travelling, trippy and bizarre adventures are must-reads. Contains a wide selection of Jerry Cornelius short stories, including THE NATURE OF THE CATASTROPHE, THE ENTROPY CIRCUIT, THE DELHI DIVISION and many more.

Please note that the content of this book primarily consists of articles available from Wikipedia or other free sources online. Pages: 31. Chapters: Books by Michael Moorcock, Michael Moorcock characters, Michael Moorcock locations, Elric of Melnibone, Stormbringer, Corum Jhaelen Irsei, Jerry Cornelius, Law and Chaos, Eternal Champion, The Swords Trilogy, Deities in the Elric series, Erekose, Dorian Hawkmoon, Vadhagh, The History of the Runestaff, Symbol of Chaos, Una Persson, Multiverse, The Final Programme, Airtight Garage, Tanelorn, The Metatemporal Detective, The Lives and Times of Jerry Cornelius, Arioch, Karl Glogauer, Ulrich von Bek, Oswald Bastable, Miss Brunner, Actorius, Middle Marches, Chardros. Excerpt: Elric of Melnibone is a fictional character created by Michael Moorcock, and the antihero of a series of sword and sorcery stories centering in an alternate Earth. The proper name and title of the character is Elric VIII, 428th Emperor of Melnibone. Later novels by Moorcock mark Elric as a facet of the Eternal Champion. Elric first appeared in print in Moorcock's novella, "The Dreaming City" (Science Fantasy #47, June 1961); subsequent novellas were reformatted as the novel Stormbringer (1965), but his first appearance in an original novel wasn't until 1973 in Elric of Melnibone. Moorcock's albinistic character is one of the better known in fantasy literature, having crossed over into multimedia, such as comics and film, though efforts towards the latter stalled over the years. The novels have been continuously in print since the 1970s. Elric is described by his creator, in the first book, Elric of Melnibone, as follows: It is the colour of a bleached skull, his flesh; and the long hair which flows below his shoulders is milk-white. From the tapering, beautiful head stare two slanting eyes, crimson and moody, and from the loose sleeves of his yellow gown emerge two slender hands, also the colour of bone. Elric was the last emperor of the...

Michael Moorcock edited and produced the magazine New Worlds from 1964 to 1973. Within its pages he encouraged the development of new kinds of popular writing out of the genre of science fiction, energetically reworking traditional themes, images and styles as a radical response to the crisis of modern fiction. The essential paradox of the new writing lay in its fascination with 'entropy' - the universal and irreversible decline of energy into disorder. Entropy provides the key both to the anarchic vitality of the magazine and to its neglect by critics and academics, as well as its intimate connection with other cultural experiments of the 1960s. The fiction of the New Worlds writers, who included Brian Aldiss, J. G. Ballard and Moorcock himself, was not concerned with the far future and outer space, but with the ambiguous and unstable conditions of the modern world. As Ballard put it: 'The only truly alien planet is Earth.' The Entropy Exhibition is the first critical assessment of the literary movement known as 'New Wave' science fiction. It examines the history of the magazine and its background in the popular imagination of the 1960s, traces the strange history of sex in science fiction and analyses development in stylistic theory and practice. Detailed attention is given to each of the three principal contributors to New Worlds - Aldiss, Ballard and Moorcock. Moorcock himself is most commonly judged by his commercial fantasy novels instead of by the magazine he supported with them, but here the balance is at last redressed: New Worlds emerges as nothing less than a focus and a metaphor for many of the transformations of English and American literature in the past two decades.

Science fiction produced in the 1970s has long been undervalued, dismissed by Bruce Sterling as "confused, self-involved, and stale". The New Wave was all but over and Cyberpunk had yet to arrive. The decade polarised sf - on the one hand it aspired to be a serious form, addressing issues such as race, Vietnam, feminism, ecology and sexuality, on the other hand it broke box office records with Star Wars, Close Encounters of the Third Kind, Alien and Superman: The Movie. Beginning with chapters on the First sf and New Wave authors who published during the 1970s, Solar Flares examines the ways in which the genre confronted a new epoch and its own history, including the rise of fantasy, the sf blockbuster, children's sf, pseudoscience and postmodernism. It explores significant figures such as Joanna Russ, Samuel R. Delany and Octavia Butler. From Larry Niven's Ringworld to Thomas M. Disch's On Wings of Song, from The Andromeda Strain to Flash Gordon and from Doctor Who to Buck Rogers, this book reclaims seventies sf writing, film and television - alongside music and architecture - as a crucial period in the history of science fiction.

Presents the exploits of the assassin rock star Jerry Corelius as he travels through the Multiverse of alternate realities that connect the sixties to the present day, along with "My Londons," a short piece describing what has shaped the author's works and an interview with the author. 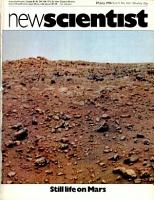 New Scientist magazine was launched in 1956 "for all those men and women who are interested in scientific discovery, and in its industrial, commercial and social consequences". The brand's mission is no different today - for its consumers, New Scientist reports, explores and interprets the results of human endeavour set in the context of society and culture.

Jerry Cornelius is an English assassin, physicist, rock star, and messiah to the Age of Science. Written between 1965 and 1967, this sequence of four novels relating Cornelius's adventures has been credited with inspiring dozens of writers and artists to rethink the genre of science fiction. Set in a shifting, fluid version of the counter-culture 1960s, these books were among the most prominent 'New Wave' SF books. Jerry Cornelius is one of the most remarkable and distinctive characters in Moorcock's work, and his time-travelling, trippy and bizarre adventures are must-reads. Contains THE FINAL PROGRAMME, A CURE FOR CANCER, THE ENGLISH ASSASSIN and THE CONDITION OF MUZAK.

“This new book, the latest Moorcockian meteorite to flash across the heavens, is a timely reminder of the scope, depth, heart and magnificence of an author with numerous readers, bright-eyed fans, global correspondents, but far less mainstream acknowledgement than he deserves. The glory of the work, in its astonishing reach and range, is that it can be freshly excavated by every rising generation.” Iain Sinclair From Jerry Cornelius and the Eternal Champion fantasies to Pyat and more recent novels, The Law of Chaos is an entertaining and accessible reader’s guide that explores the life and achievements of Michael Moorcock, one of modern literature’s most influential figures. All Moorcock’s works are examined and discussed in detail from early fantasies to his later philosophical novels. With an introduction and other material by Moorcock himself, The Law of Chaos travels the moonbeam roads through the enigmatic multiverse of a celebrated literary icon.

This encyclopedia is the most up-to-date, concise, clear and affordable guide to all aspects of science fiction, from its background to generic themes and devices, from authors (established and new) to films. Science fiction has evolved into one of the most popular, cutting-edge and exciting fiction geners, with a proliferation of modern and classic authors, themes and ideas, movies, TV series and awards. Arranged in an A-Z format, and featuring a comprehensive index and cross-referencing system, The Mammoth Encyclopedia of Science Fiction is also the most accessible and easy to use encyclopedia of its kind currently available.

“He is the master storyteller of our time.”—Angela Carter Michael Moorcock: Legendary author of the Elric saga, Science Fiction Grand Master, platinum album–receiving rock star, and controversial editor of the new wave fiction movement’s New Worlds. In this definitive collection, discover the incomparable stories of one of our most important contemporary writers. These exceptional stories range effortlessly from the genre tales that continue to define fantasy to the author’s critically acclaimed mainstream works. Classic offerings include the Nebula Award–winning novella “Behold the Man,” which introduces a time traveler and unlikely messiah that H.G. Wells never imagined; “The Visible Men,” a recent tale of the ambiguous and androgynous secret agent Jerry Cornelius; the trilogy “My Experiences in the Third World War,” where a Russian agent in an alternate Cambodia is powerless to prevent an inevitable march toward nuclear disaster; and “A Portrait in Ivory,” a Melibone story of troubled anti-hero Elric and his soul-stealing sword, Stormbringer. Newer work handpicked by an expert editing team includes one previously unpublished story and three uncollected stories.

Meet Pyat: Tsarist rebel, Nazi thug, continental con man and reactionary counterspy. He is the dark and dangerous antihero of the legendary Michael Moorcock's most controversial work. Published in 1981to great critical acclaim - then condemned and unavailable in the United States for thirty years - Byzantium Endures is the story of a cocaine addict, sexual adventurer and obsessive anti-Semite whose journey from Leningrad to London connects him with those from Trotsky to Makhno, and whose career echoes that of the twentieth century's descent into Fascism and total war.