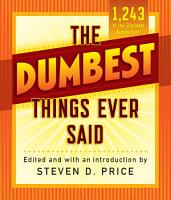 A collection of stupid utterances, mostly unintentional--although not always--from politics, show business, sports, and anywhere else people can put their feet in their mouths. Based on recorded history, it's safe to say that dumb remarks have been with us since the invention of writing. Young or old, rich or poor, famous or unknown, people of all generations and cultures have seized the opportunity to say something dumb - stupidity has always been an equal opportunity employer. In celebration of such mental lapses and pure idiocy, here is a collection of stupid utterances, unintentional and otherwise, from the worlds of politics, radio, television, newspapers, show business, sports, and literature - and everywhere else people can - and have - put their feet in their mouths.

Presents a collection of stories about the stupid things people do and say. 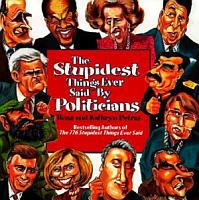 Collects quotations from senators, congressmen, presidents, and presidential candidates, ranging from Bill Clinton's argument on the meaning of "it" to Bob Dole's crusade to wipe out erectile dysfunction

Offers a compilation of the worst lines ever presented on the silver screen, arranged in alphabetical categories 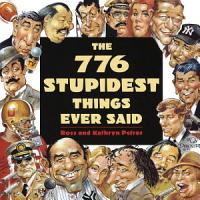 A connoisseur's compendium of Freudian slips, spoonerisms, double-talk, and utter bosh from famous and infamous figures past and present -- a complete course in anti-eloquence by the foot-in-mouth champions of all time.

Following the success of Business Babble, the award-winning journalist and the highly regarded illustrator have again collaborated to bring you a collection of the 1,000 most silly, stupid, arrogant, offensive, racist and just plain dumb remarks politicians have ever placed on public record. Subjects covered range from war, peace and economics to ``Bushisms'' and ``Quayludes.'' 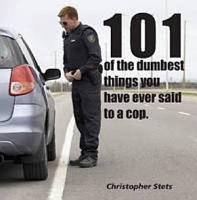 Speeders, Drunks, and the Funny things people say to get out of a traffic ticket

If you think you've heard every dumb thing they've said or done...think again! Outrageous indulgent, and downright dumb. That's right, we're talking aout the words and deeds committed by politicians, our favorite and least favorite people in the whole world. In this hilarious collections, it's he Democrats who step up to the mike, open their mouths, and insert their collective feet. Democrats do the dumbest things. Just ask any Republican who might wonder how Senator Ted Kennedy, whose legacy may have as much to do with his partying as with his party affiliation, kept his pants on long enough to serve the public. When Ted was photographed atop a twenty-two year old woman on a speed boat, a fellow senator quipped, "Well Teddy, I see you've changed your position on offshore drilling." You'll howl with laughter and wince in pain at the musguided actions, bizarre statements, and embarrassing moments of notable Democrats including Hillary Clinton, Jimmy Carter, Rev. Al B. Sharpton, Ed Koch, Gary Hart, Rev. Jesse Jackson, Jerry Brown, Lyndon Johnson, and of course, Bill Clinton. Find out the latest from presidential campaign 2000--namely what are Al Gore and local Democratic "loonies" doing to keep the "dumb hall of fame" from running out of members? Highlights include: After the Chicago Bulls won their sixth NBA championship in 1998 Vice President Al Gore gushed, "I tell you that Michael Jackson is unbelievable isn't he?" John F. Kennedy had this to say about aging: "There are two naked girls in the room, but I'm sitting here reading The Wall Street Journal. Does that mean I'm getting old?" Washington D.C. mayor Marion Barry once said, "Outside of the killing, we have one of the lowest crime rates in the country." These funny, edgy examinations of crazy political antics are sure to be as controversial as they are entertaining. Democrats will hate them. Republicans will love them. And everyone will want to read more.

Johnny Depp. Marilyn Monroe. Marlon Brando. Leonardo DiCaprio. Woody Allen. Shanron Stone. What do all of these actors have in common? They're outrageous, receive huge salaries, have enormous egos, and have way too much spare time. Their out-of-control lifestyles prove that, as one Hollywood observer noted, "Hollywood is a trip through a sewer in a glass-bottomed boat." You'll learn which director was furious when he was misquoted as saying, "Actors are cattle." He claimed he had really said, "Actors should be treated as cattle." You'll discover that Bruce Wilis ordered the final scenes in Striking Distance to be re-shot at a cost of over $750,000 because the original shots exposed his toupee. You'll find that Melanie Griffith explained her ignorance of the Nazi holocaust by saying, "I don't know why I didn't know. Maybe I missed school that day...I'm not stupid." Whether you're a fan of Hugh Grant, Dennis Hopper, or Whoopi Goldberg, you'll learn about all of the embarrassing moments in your favorite star's life. From actors like Ben Affleck and Cameron Diaz to screen legends like Frank Sinatra and Judy Garland, Movie Stars Do the Dumbest Things is proof that actors are more childish and impulsive than you've ever imagined.