Ian Philpott presents us here with a compendium of facts, operational histories and photo illustrations, combined to create a comprehensive account of the early years of the Royal Air Force. Illustrated throughout, it features details of all military operations from 1914 to 1918 which impacted upon the organisation. Also included are operational details of the Independent Bomber Force throughout 1918, a supplementary historical strand that is sure to appeal to Aviation enthusiasts with a taste for features of niche focus. Details of the airfields, landing grounds, seaplane bases and various other landmarks of this era are given, and readers are encouraged to use the work as a reference book, being as it is a weighty tome of encyclopedic scope. ??Sure to make a welcome addition to any aviation enthusiasts library, this well-researched piece of work has been a long time in the making. Philpott brings his typical flare to the project, leaving no stone unturned when it comes to this dynamic, defining period of Royal Air Force history.??As featured in the East Kent Mercury and Essence Magazine.

A great historian’s masterful account of the origins of air power in the RAF. The birth of the Royal Air Force during World War I marked a pivotal moment in modern military and political history. With Europe’s western front frozen in a bloody stalemate of trench warfare, both sides sought some means of directly attacking enemy resources and morale. The new technologies of air power were used at first for reconnaissance of enemy positions for artillery strikes. By 1917 German bombers had begun raids on British cities, including an attack on London that killed hundreds, with eighteen schoolchildren among the casualties. Public outrage in Britain sparked a call for air defense and spurred political support for an independent air ministry. Prime Minister David Lloyd George and his minister of munitions, Winston Churchill, led the debates over how to shape Britain’s air power during the war. The immediate path to an independent RAF is a fascinating story of political, bureaucratic, and personal rivalries. By the end of World War I, the RAF was launching effective bombing campaigns on industrial and military targets in western Germany. It survived postwar retrenchment thanks largely to Churchill, who as colonial secretary gave the RAF special responsibility for enforcing imperial control in the Middle East, especially in the new League of Nations mandates of Palestine, Transjordan, and Iraq. The RAF helped to shape the way air power developed not just in Britain but notably in Germany and the United States. The massive bombing campaigns of World War II against civilian and industrial targets in major cities are rooted in this history. This compact book shows a master historian at work. In command of the archival sources, at home in all dimensions of the story, Richard Overy crafts an engrossing narrative of this turning point in our history.

*Includes pictures *Includes contemporary accounts *Includes online resources and a bibliography for further reading One of the most important breakthroughs in military technology associated with World War I, and certainly the one that continues to capture the public imagination, was the use of airplanes, which were a virtual novelty a decade before. While the war quickly ground to a halt in its first few months, the skies above the Western Front became increasingly busy. The great powers had already been acquiring aircraft for potential uses, but given that aerial warfare had never been a major component of any conflict, it's understandable that few on either side had any idea what the planes were capable of doing. Furthermore, at the start of the war, all sides' aircraft were ill-equipped for combat mostly because the idea that planes might somehow fight was still a novel one, and the adaptations had not yet been developed that would allow the aerial battles later in the war. As a result, aircraft were used almost entirely for reconnaissance early on, allowing generals to gain unprecedented levels of information about enemy movements. Such intelligence allowed the French to counter German movements in what became the First Battle of the Marne, ending Germany's hopes for victory through the Schlieffen plan. Similarly, in the east, German planes were vital in tracking, encircling and destroying Russian forces at Tannenberg. Some armies, such as the French, saw air intelligence as a strategic matter, with aircraft capable mainly of identifying enemy forces before battle and contributing to advanced preparations. The Germans, on the other hand, believed that aircraft could provide tactical information once battle had commenced. Pilots such as Oswald Boelcke, Germany's first great aerial officer, would fly over enemy positions in two-seat aircraft with a spotter in the back, identifying Allied positions and using colored lights to direct the fire of artillery on the ground. Of course, spotting took on great importance because of the growing range and power of artillery. Much of the fire from the great guns was aimed indirectly since the gunners could not see their targets and thus relied on intelligence from others to direct them. Maps of enemy-held territory were often woefully inadequate to start with, and with the need to know where moving enemy formations were positioned, the business gained an added complexity, but aircraft could cut through this by providing up-to-date intelligence on enemy positions and sending it back to the gun batteries which were lobbing shells over their own front lines. The Royal Air Force (RAF), Britain's legendary air arm, was born in the skies above the First World War. The British had previously used balloons for spotting and reconnaissance for decades, and in the years leading up to the war, planes started seeing military use. They mostly provided reconnaissance, though experiments were made in using them offensively. During the Boer War of 1899-1902, the British Army used the crews of helium-filled balloons to plot and help target artillery fire. But these were small, tentative steps. The first patent to fit a machine gun to a plane, taken out in 1910, had not yet led to active fighting vehicles, and there was no doctrine, no tactics, and no combat between massed air fleets. That changed during World War I, as the skies above the Western Front became the crucible in which the preceding fragments of aerial warfare were smelted in the white hot heat of war. For the British, this meant the creation of a large and unified flying force which by 1918 would become the RAF. The Birth of the Royal Air Force in World War I: The History and Legacy of British Air Power during the Great War examines the creation and evolution of the RAF over the course of World War I.

'A magnetic and colourful portrait' Daily Telegraph Hugh 'Boom' Trenchard was embarrassed by being described as 'The Father of the Royal Air Force' - he thought others were more deserving. But the reality was that no man did more to establish the world's first independent air force and ensure its survival in the teeth of fierce opposition from both the Admiralty and the War Office. Born in Taunton in 1873, Trenchard struggled at school, not helped by the shame of his solicitor father's bankruptcy when he was sixteen. He failed entrance examinations to both the Royal Navy and the Army several times, eventually obtaining a commission through the 'back door' of the militia. After service in India, South Africa - where he was seriously wounded - and Nigeria, he found his destiny when he joined the fledgling Royal Flying Corps in 1912, where he was soon known as 'Boom' thanks to his stentorian voice. Quick to recognise the huge potential aircraft offered in future conflicts, he rose rapidly to command the RFC in France during the First World War despite handicaps that would have blighted conventional military careers: he was obstinate, tactless, inarticulate and chronically unable to remember names - yet he was able to inspire unflagging loyalty among all ranks. Despite his conspicuous distrust of politicians, he served as a successful Chief of the Air Staff for a decade after the war and then, at the personal request of the King, took over as Commissioner of the Metropolitan Police, which he reorganised and reformed. He never wavered in his belief that mastery of the air could only be achieved by relentless offensive action, or in his determined advocacy of strategic bombing. His most enduring legacy was the creation of the finest air force in the world, engendered with the spirit that won the Battle of Britain.

In forming the Royal Air Force on 1 April 1918, Britain created the world’s first independent air service. Britain entered the First World War with less than 200 ill-assorted flying machines divided between the army and the navy, but by the end of the war the RAF mustered almost 300,000 personnel and 22, 000 aircraft. Originally published in 1986, more than 65 years after the event, the decision to form the RAF remained poorly understood and Malcolm Cooper presented the first detailed modern analysis of its creation, shedding new light on the process by which Britain entered the air age. Set against the background of the build-up of air power during the First World War, the book explains how deepening political concern at failures in home air defence, public demands for retaliatory air action against Germany, problems of mobilization and expansion in the aircraft industry, and disagreements between the existing army and navy air services combined to create the conditions for an independent air force. The author argues that the pressures of war were insufficient to give real substance to the RAF’s independence and that its failure to escape from its wartime role as an ancillary service was also of crucial significance in the evolution of British air strategy in later years. Based on an extensive study of official documents and private papers and amply illustrated with contemporary photographs, this title will prove invaluable in understanding both strategic thinking in the Great War and the early development of a form of warfare which dominated military and naval operations in the twentieth century. 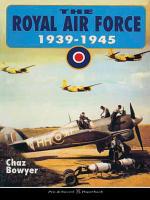 This book examines every aspect of The Royal Air Force, including organisation, statistics and operations during World War Two.