A captivating exploration of the role in which Queen Victoria exerted most international power and influence: her role as matchmaking grandmother In the late nineteenth century, Queen Victoria had over thirty surviving grandchildren. To maintain and increase power in Europe, she hoped to manoeuvre them into dynastic marriages. In her sights was royalty from across the world. Yet for all their seeming obedience, her grandchildren often had plans of their own, plans fuelled by strong wills and romantic hearts. Her matchmaking plans were only further complicated by their coinciding with tumultuous international upheavals; revolution and war were in the air and after her death, her most carefully laid plans fell to ruin. Queen Victoria's Matchmaking travels through the most glittering, decadent palaces of Russia and Europe, weaving in scandals, political machinations and family tensions, to enthralling effect. It is at once an intimate portrait of the royal family and an examination of the conflict caused by the power, love and duty that shaped the marriages that Queen Victoria arranged. At the heart of it all is Queen Victoria herself: doting grandmother one moment, determined manipulator the next.

Prince Alfred, who was created Duke of Edinburgh in 1866 and became Duke of Saxe-Coburg Gotha in 1893, was the second son of Queen Victoria and Prince Albert. A patron of the arts, pioneer philatelist and amateur violinist, he joined the Royal Navy as a boy and rose to become Admiral of the Fleet. At the age of 18 he was elected King of Greece by overwhelming popular vote in a plebiscite, although political agreements between the Great Powers of Europe prevented him from accepting the vacant crown. The most widely travelled member of his family, he had visited all five continents by the age of 27, and while on a tour of Australia in 1868 he narrowly escaped assassination at the hands of a Fenian sympathiser. Married to Grand Duchess Marie of Russia, the only surviving daughter of Tsar Alexander II, at one stage he had to face the possibility that he might be required to fight on behalf of the British empire against that of his father-in-law. His last years were overshadowed by marital difficulties, alcoholism and ill-health, and the suicide of his only son and heir.

Queen Victoria's reign coincided with the arrival of the mass media. 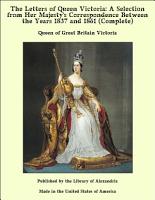 Entrusted by His Majesty the King with the duty of making a selection from Queen Victoria's correspondence, we think it well to describe briefly the nature of the documents which we have been privileged to examine, as well as to indicate the principles which have guided us throughout. It has been a task of no ordinary difficulty. Her Majesty Queen Victoria dealt with her papers, from the first, in a most methodical manner; she formed the habit in early days of preserving her private letters, and after her accession to the Throne all her official papers were similarly treated, and bound in volumes. The Prince Consort instituted an elaborate system of classification, annotating and even indexing many of the documents with his own hand. The result is that the collected papers form what is probably the most extraordinary series of State documents in the world. The papers which deal with the Queen's life up to the year 1861 have been bound in chronological order, and comprise between five and six hundred volumes. They consist, in great part, of letters from Ministers detailing the proceedings of Parliament, and of various political memoranda dealing with home, foreign, and colonial policy; among these are a few drafts of Her Majesty's replies. There are volumes concerned with the affairs of almost every European country; with the history of India, the British Army, the Civil List, the Royal Estates, and all the complicated machinery of the Monarchy and the Constitution. There are letters from monarchs and royal personages, and there is further a whole series of volumes dealing with matters in which the Prince Consort took a special interest. Some of them are arranged chronologically, some by subjects. Among the most interesting volumes are those containing the letters written by Her Majesty to her uncle Leopold, King of the Belgians, and his replies.1 The collection of letters from and to Lord Melbourne forms another hardly less interesting series. In many places Queen Victoria caused extracts, copied from her own private Diaries, dealing with important political events or describing momentous interviews, to be inserted in the volumes, with the evident intention of illustrating and completing the record. 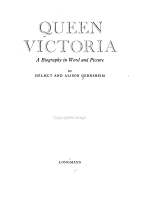