The best-selling novelist and author of The Master Quilter furnishes a new collection of patterns and instructions for creating quilt projects inspired by the Elm Creek quilt novels, including more than thirty traditional blocks, eleven complete projects, favorite character sketches, and tips and techniques for successful quiltmaking. Original. 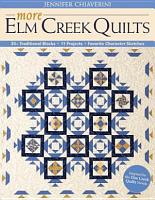 Timeless Quilts Inspired by the New York Times Best-Selling Novels. 11 traditional quilts for all skill levels, featuring more than 30 traditional blocks. Read about your favorite Elm Creek novels: The Sugar Camp Quilt, The Christmas Quilt, Circle of Quilters, The Quilter's Homecoming, and The New Year's Quilt. Complete instructions and full-sized patterns for each quilt, plus a chapter on quilting basics. Jennifer Chiaverini is back with another collection of beautiful quilts from Elm Creek Quilts. The projects include Jennifer's original designs, plus a sampler quilt made from the top 10 blocks in the Elm Creek Quilts design contest, and a quilt created from Chimneys and Cornerstones blocks contributed by Elm Creek readers. Every chapter includes excerpts and favorite character sketches from the Elm Creek Quilts novels. You loved the stories-now make more of the quilts they inspired!

Abolitionist school teacher Dorothea Grainger faces the ultimate test of her courage and convictions when the national debate over slavery sets friends and neighbours against one another in rural Creek's Crossing, Pennsylvania.

Collects three titles in the Elm Creek quilts series, including "The Runaway Quilt," "The Quilter's Legacy," and "The Master Quilter."

Three novelscover the lives of quilters from the American Civil War to the present day.

A heartwarming rendition of how Christmas traditions at Elm Creek Manor were created—and embellished—over generations. When Christmas Eve comes to Elm Creek Manor, the tenor of the holiday is far from certain. Sylvia Bergstrom Compson, the Master Quilter, has her own reasons for preferring a quiet, even subdued, Christmas. Her young friend Sarah McClure, however, takes the opposite view and decides to deck the halls brightly. As she explores the trunks packed with Bergstrom family decorations that haven't been touched in more than fifty years, Sarah discovers a curious Christmas quilt. Begun in seasonal fabrics and patterns, the quilt remains unfinished. Sylvia reveals that the handiwork spans several generations and a quartet of Bergstrom quilters—her great aunt, her mother, her sister, and herself. As she examines the array of quilt blocks each family member contributed but never completed, memories of Christmases past emerge. At Elm Creek Manor, Christmas began as a celebration of simple virtues—joy and hope buoyed by the spirit of giving. As each successive generation of Bergstroms lived through its unique trials—the antebellum era, the Great Depression, World War II—tradition offered sustenance even during the most difficult times. For Sylvia, who is coping with the modern problem of family dispersed, estranged, or even forgotten, reconciliation with her personal history may prove as elusive as piecing the Christmas Quilt. Elm Creek Manor is full of secrets, from a Christmas tree with unusual properties to the sublime Bergstrom strudel recipe. Sylvia's tales at first seem to inform her family legacy but ultimately illuminate far more, from the importance of women's art to its place in commemorating our shared experience, at Christmastime and in every season.

Jennifer Chiaverini’s bestselling Elm Creek Quilts series began with The Quilter’s Apprentice and continues with Round Robin—the name for a quilt stitched by many hands in turn—a poignant story of friendship and loyalty. The Elm Creek Quilters have begun a Round Robin quilt, created by sewing concentric patchwork borders to a central block, as a gift for their beloved fellow quilter Sylvia Compson. But even as the quilt is passed from friend to friend, its eloquent beauty increasing with every stitch, the threads of their happiness begin to unravel. As each woman confronts a personal crisis, a painful truth, or a life-changing choice, the quilt serves as a symbol of the complex and enduring bonds between mothers and daughters, sisters and friends.

Fans of Jennifer Chiaverini's Elm Creek Quilts series can now stitch up the quilts inspired by her last six novels. The best-selling author shares her inspiration for each of the quilts featured in The Winding Ways Quilt, The Quilter's Kitchen, The Lost Quilter, A Quilter's Holiday, The Aloha Quilt, The Union Quilters, and The Wedding Quilt. Create a bit of Elm Creek for your home!

Master Quilter Sylvia Bergstrom Compson treasures an antique quilt called by three names -- Birds in the Air, after its pattern; the Runaway Quilt, after the woman who sewed it; and the Elm Creek Quilt, after the place to which its maker longed to return. That quilter was Joanna, a fugitive slave who traveled by the Underground Railroad to reach safe haven in 1859 at Elm Creek Farm. Though Joanna's freedom proved short-lived -- she was forcibly returned by slave catchers to Josiah Chester's plantation in Virginia -- she left the Bergstrom family a most precious gift, her son. Hans and Anneke Bergstrom, along with maiden aunt Gerda, raised the boy as their own, and the secret of his identity died with their generation. Now it falls to Sylvia -- drawing upon Gerda's diary and Joanna's quilt -- to connect Joanna's past to present-day Elm Creek Manor. Just as Joanna could not have foreseen that, generations later, her quilt would become the subject of so much speculation and wonder, Sylvia and her friends never could have imagined the events Joanna witnessed in her lifetime. Punished for her escape by being sold off to her master's brother in Edisto Island, South Carolina, Joanna grieves over the loss of her son and resolves to run again, to reunite with him someday in the free North. Farther south than she has ever been, she nevertheless finds allies, friends, and even love in the slave quarter of Oak Grove, a cotton plantation where her skill with needle and thread soon becomes highly prized. Through hardship and deprivation, Joanna dreams of freedom and returning to Elm Creek Farm. Determined to remember each landmark on the route north, Joanna pieces a quilt of scraps left over from the household sewing, concealing clues within the meticulous stitches. Later, in service as a seamstress to the new bride of a Confederate officer, Joanna moves on to Charleston, where secrets she keeps will affect the fate of a nation, and her abilities and courage enable her to aid the country and the people she loves most. The knowledge that scraps can be pieced and sewn into simple lines -- beautiful both in and of themselves and also for what they represent and what they can accomplish -- carries Joanna through dark days. Sustaining herself and her family through ingenuity and art during the Civil War and into Reconstruction, Joanna leaves behind a remarkable artistic legacy that, at last, allows Sylvia to discover the fate of the long-lost quilter.

The ninth book in Jennifer Chiaverini's bestselling series—when two of Elm Creek Quilts’ founding members decide to leave the fold, who can possibly take their place in the circle of quilters? When Elm Creek Quilts announces openings for two new teachers, quilters everywhere are vying to land the prestigious post. The impending departure of two founding members means untold changes for the Elm Creek Quilters. As they begin the interview process, a single question emerges: Who can possibly take the place of beloved colleagues and friends? "We must evaluate all of the applicants' qualities," advises Master Quilter Sylvia Compson. "Our choice will say as much about us as it says about who we decide to hire." Who merits a place among the circle of quilters? Will it be Maggie, whose love of history shines through in all her projects; Anna, whose food-themed quilts are wonderfully innovative; Russ, the male quilter with a completely original style; Karen, a novice teacher whose gifts for language complement her deep understanding of the quilters' mission; or Gretchen, the soulful veteran whose craft is inspired by quilting tradition?

A latest installment in the popular series brings newcomers into the Circle of Quilters who share the original members' struggles to balance their creative lives with their friendship and their work and family demands. By the author of The Quilter's Homecoming. Reprint. 50,000 first printing.

The impending marriage of Elm Creek's most renowned quilting instructor prompts the stitching of a perfect commemorative bridal quilt, an endeavor that is challenged by closely guarded secrets among the Elm Creek Quilters.

The fourth book in the popular Elm Creek Quilts series explores a question that has long captured the imagination of quilters and historians alike: Did stationmasters of the Underground Railroad use quilts to signal to fugitive slaves? In her first novel, The Quilter's Apprentice, Jennifer Chiaverini wove quilting lore with tales from the World War II home front. Now, following Round Robin and The Cross-Country Quilters, Chiaverini revisits the legends of Elm Creek Manor, as Sylvia Compson discovers evidence of her ancestors' courageous involvement in the Underground Railroad. Alerted to the possibility that her family had ties to the slaveholding South, Sylvia scours her attic and finds three quilts and a memoir written by Gerda, the spinster sister of clan patriarch Hans Bergstrom. The memoir describes the founding of Elm Creek Manor and how, using quilts as markers, Hans, his wife, Anneke, and Gerda came to beckon fugitive slaves to safety within its walls. When a runaway named Joanna arrives from a South Carolina plantation pregnant with her master's child, the Bergstroms shelter her through a long, dangerous winter -- imagining neither the impact of her presence nor the betrayal that awaits them. The memoir raises new questions for every one it answers, leading Sylvia ever deeper into the tangle of the Bergstrom legacy. Aided by the Elm Creek Quilters, as well as by descendants of others named in Gerda's tale, Sylvia dares to face the demons of her family's past and at the same time reaffirm her own moral center. A spellbinding fugue on the mysteries of heritage, The Runaway Quilt unfolds with all the drama and suspense of a classic in the making. 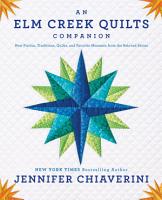 A beautiful keepsake volume to accompany the beloved New York Times bestselling series Over the course of the bestselling Elm Creek Quilts series, readers have expressed a longing to visit Elm Creek Manor, meet the quilters themselves, and admire their beautiful creations. Jennifer Chiaverini’s An Elm Creek Quilts Companion is the next best thing to a guided tour. Inside, readers will discover a treasure trove of delights, including the Bergstrom family tree, character biographies, quilt block illustrations, full-color photographs of quilts featured in the novels, and “Behind the Scenes at Elm Creek Quilt Camp,” an exclusive short story inspired by questions from real readers. No Elm Creek Quilts fan will want to be without this indispensable guide to the cherished series.

In the aftermath of a difficult divorce, Bonnie heads to Maui to help her friend Claire launch a quilter's retreat, a getaway marked by beautiful sunsets, regional quilting activities and her ex's plot to claim Elm Creek Quilts resources. By the author of The Lost Quilter. Reprint.