This is a comprehensive study of the surviving monuments of the Qarakhanids - an important yet little-known medieval dynasty that ruled much of Central Asia between the late 10th and early 13th centuries. Based on extensive fieldwork and many hard-to-find Russian sources, the book places the surviving monuments into the wider cultural context of the region. Many photographs and new ground-plans are included, as well as detailed studies of individual monuments and the wider architectural aesthetic. These monuments serve as the link between the mostly lost Samanid architecture and the far larger and better-known monuments of the Timurids.

In this comprehensive account of the culture and history of Central Asia, Edgar Knobloch describes the main centers of the age-old civilization. Throughout the book he spices the text with quotations from the works of contemporary travelers, while providing an expert's commentary on the archaeological, architectural, and decorative features of the sites he describes. His original photographs are supplemented by numerous line drawings, plans of the main cities, and sketches of principal monuments and their ornamental features. 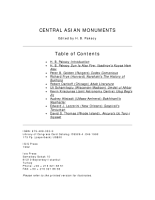 CARRIE, a full-text electronic library based at the University of Kansas, presents the text of "Central Asian Monuments" (ISBN 975-428-033-9). H. B. Paksoy edited the book, which was originally published in 1992 by the Isis Press. The book contains essays on eight Central Asian literary monuments and provides historical perspective on each.

Turkestan – the great landmass of Central Asia and Western China – is an intriguing meeting point of civilizations. Four major invasions – Greek, Arab, Mongol and Russian – together with Persian, Turkic and Chinese cultural influences, have made their mark on this vast and sometime forbidding region. The Great Silk Road ran to the West through it, while nomad and urban peoples combined over the centuries to produce a cultural flowering under Timur and his successors in the late medieval and early modern periods, through a rich profusion of artistic and architectural styles and ornament. In this comprehensive account of the culture and history of Central Asia, Edgar Knobloch describes the main centres of our human civilization. He spices the text with quotations from the works of contemporary travellers, while providing an expert’s commentary on the archaeological, architectural and decorative features of the sites he describes. The stunning and evocative photographs are supplemented by numerous maps, incorporating the recent developments in the region’s borders and frontiers. With up-to-date information on borders, check points and visas, Treasures of the Great Silk Road should appeal not only to scholars and those interested in the great cultural heritage of this region, but also to travellers to the region.

For centuries, Central Asia has been a leading civilization, an Islamic heartland, and a geographical link between West and East. After a long traditional history, it is now in a state of change. With the breakup of the Soviet Union in 1991, five newborn Central Asian states have emerged in place of the former Soviet Central Asia and Afghanistan. Central Asia provides the most comprehensive survey of the history of the impact of Russian rule upon the political, economic, social, intellectual, and cultural life of this diverse region. Together, these essays convey a sense of the region’s community as well as the divisive policies that have affected it for so long. Now in its third edition (it was first published in 1967 and revised in 1989), this new edition of Central Asia has been updated to include a new preface, a revised and updated bibliography, and a final chapter that brings the book up to 1994 in considering the crucial problems that stem from a deprivation of sovereign, indigenous leadership over the past 130 years. This volume provides a broad and essential background for understanding what has led up to the late twentieth-century configuration of Central Asia. 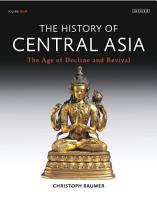 This set includes all four volumes of the critically acclaimed History of Central Asia series. The epic plains and arid deserts of Central Asia have witnessed some of the greatest migrations, as well as many of the most transformative developments, in the history of civilization. Christoph Baumer's ambitious four-volume treatment of the region charts the 3000-year drama of Scythians and Sarmatians; Soviets and transcontinental Silk Roads; trade routes and the transmission of ideas across the steppes; and the breathless and brutal conquests of Alexander the Great and Chinghiz Khan. Masterfully interweaving the stories of individuals and peoples, the author's engaging prose is richly augmented throughout by colour photographs taken on his own travels. This set includes The Age of the Steppe Warriors (Volume 1), The Age of the Silk Roads (Volume 2), The Age of Islam and the Mongols (Volume 3) and The Age of Decline and Revival (Volume 4)

With the collapse of communism, post-communist societies scrambled to find meaning to their new independence. Central Asia was no exception. Events, relationships, gestures, spatial units and objects produced, conveyed and interpreted meaning. The new power container of the five independent states of Kazakhstan, Kyrgyzstan, Tajikistan, Turkmenistan and Uzbekistan would significantly influence this process of signification. Post-Soviet Central Asia is an intriguing field to examine this transformation: a region which did not see an organised independence movement develop prior to Soviet implosion at the centre, it provokes questions about how symbolisation begins in the absence of a national will to do so. The transformation overnight of Soviet republic into sovereign state provokes questions about how the process of communism-turned-nationalism could become symbolised, and what specific role symbols came to play in these early years of independence. Characterized by authoritarianism since 1991, the region’s ruling elites have enjoyed disproportionate access to knowledge and to deciding what, how and when that knowledge should be applied. The first of its kind on Central Asia, this book not only widens our understandings of developments in this geopolitically important region but also contributes to broader studies of representation, ritual, power and identity. This book was published as a special issue of Europe-Asia Studies.

Providing a wealth of empirical research on the everyday practise of Islam in post-Soviet Central Asia, this book gives a detailed account of how Islam is understood and practised among ordinary Muslims in the region, focusing in particular on Uzbekistan. It shows how individuals negotiate understandings of Islam as an important marker for identity, grounding for morality and as a tool for everyday problem-solving in the economically harsh, socially insecure and politically tense atmosphere of present-day Uzbekistan. Presenting a detailed case-study of the city of Bukhara that focuses upon the local forms of Sufism and saint veneration, the book shows how Islam facilitates the pursuit of more modest goals of agency and belonging, as opposed to the utopian illusions of fundamentalist Muslim doctrines. 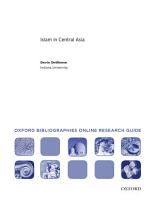 This ebook is a selective guide designed to help scholars and students of Islamic studies find reliable sources of information by directing them to the best available scholarly materials in whatever form or format they appear from books, chapters, and journal articles to online archives, electronic data sets, and blogs. Written by a leading international authority on the subject, the ebook provides bibliographic information supported by direct recommendations about which sources to consult and editorial commentary to make it clear how the cited sources are interrelated related. A reader will discover, for instance, the most reliable introductions and overviews to the topic, and the most important publications on various areas of scholarly interest within this topic. In Islamic studies, as in other disciplines, researchers at all levels are drowning in potentially useful scholarly information, and this guide has been created as a tool for cutting through that material to find the exact source you need. This ebook is a static version of an article from Oxford Bibliographies Online: Islamic Studies, a dynamic, continuously updated, online resource designed to provide authoritative guidance through scholarship and other materials relevant to the study of the Islamic religion and Muslim cultures. Oxford Bibliographies Online covers most subject disciplines within the social science and humanities, for more information visit www.aboutobo.com. 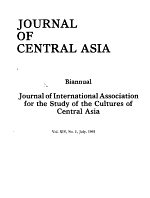