Collection of annotated legends from the Tenino, Umatilla, and Watlala or Cascades Indians.

The 1960s and 1970s were a time of radical change in U.S. history. During these turbulent decades, Native Americans played a prominent role in the civil rights movement, fighting to achieve self-determination and tribal sovereignty. Yet they did not always agree on how to realize their goals. In 1971, a group of tribal leaders formed the National Tribal Chairmen’s Association (NTCA) to advocate on behalf of reservation-based tribes and to counter the more radical approach of the Red Power movement. Voice of the Tribes is the first comprehensive history of the NTCA from its inception in 1971 to its 1986 disbandment. Scholars of Native American history have focused considerable attention on Red Power activists and organizations, whose confrontational style of advocacy helped expose the need for Indian policy reform. Lost in the narrative, though, are the achievements of elected leaders who represented the nation’s federally recognized tribes. In this book, historian Thomas A. Britten fills that void by demonstrating the important role that the NTCA, as the self-professed “voice of the tribes,” played in the evolution of federal Indian policy. During the height of its influence, according to Britten, the NTCA helped implement new federal policies that advanced tribal sovereignty, protected Native lands and resources, and enabled direct negotiations between the United States and tribal governments. While doing so, NTCA chairs deliberately distanced themselves from such well-known groups as the American Indian Movement (AIM), branding them as illegitimate—that is, not “real Indians”—and viewing their tactics as harmful to meaningful reform. Based on archival sources and extensive interviews with both prominent Indian leaders and federal officials of the period, Britten’s account offers new insights into American Indian activism and intertribal politics during the height of the civil rights movement.

Drawing on a vast array of primary and secondary sources, Roger L. Nichols traces the changing relationships between Native peoples and whites in the United States and Canada from colonial times to the present. Dividing this history into five stages, beginning with Native supremacy over European settlers and concluding with Native peoples’ political, economic, and cultural resurgence, Nichols carefully compares and contrasts the effects of each stage on Native populations in the United States and Canada. This second edition includes new chapters on major transformations from 1945 to the present, focusing on social issues such as transracial adoption of Native children, the uses of national and international media to gain public awareness, and demands for increasing respect for tribal religious practices, burial sites, and historic and funerary remains. 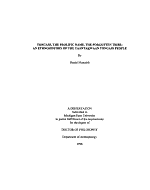 "Anthropological and archeological sources indicate that the Tongass Tlingit people of southern southeast Alaska have been a Kwaan or Tlingit group for hundreds if not thousands of years. Regardless, of this scholarly recognition, the federal government has not acknowledged the Tongass as a tribe. This research utilizes contemporary ethnographic fieldwork and is complimented by archeological, archival, and ethnographic fieldwork and is complimented by archeological, archival, and ethnohistorical sources to document the Tongass or Taantakwaan cultural identity. This study focuses on how culture and identity is created and maintained for the Tongass people. The driving forces behind both the individual identity and the group identity or sense of community for the Tongass are: (1) Tlingit kinship and social organization; (2) the transmission of knowledge; and (3) their connection to the land and resources. These three aspects of Tongass cultural identity are intertwined. This study concentrates on how the Tongass Taantakwaan people are perceived as a distinct community by themselves and others"--Leaf [ii].

The Rights of Indians and Tribes, first published in 1983, has sold over 100,000 copies and is the most popular resource in the field of Federal Indian Law. The book, which explains this complex subject in a clear and easy-to-understand way, is particularly useful for tribal advocates, government officials, students, practitioners of Indian law, and the general public. Numerous tribal leaders highly recommend this book. Incorporating a user-friendly question-and-answer format, The Rights of Indians and Tribes addresses the most significant legal issues facing Indians and Indian tribes today, including tribal sovereignty, the federal trust responsibility, the regulation of non-Indians on reservations, Indian treaties, the Indian Civil Rights Act, the Indian Gaming Regulatory Act, and the Indian Child Welfare Act. This fully-updated new edition features an introduction by John Echohawk, Executive Director of the Native American Rights Fund.