WINNER OF THE OUTSTANDING GENERAL SPORTS WRITING AWARD, BRITISH SPORTS BOOK AWARDS WINNER OF THE BOARDMAN TASKER PRIZE WINNER OF THE MOUNTAIN & WILDERNESS PRIZE, BANFF FESTIVAL WINNER OF THE TONY LOTHIAN AWARD, BIOGRAPHERS’ CLUB For the first time, drawing upon previously unseen diaries and letters, rare archive material and interviews, Everest – The First Ascent tells the remarkable story of Griffith Pugh, the forgotten team member whose scientific breakthroughs ensured the world’s highest mountain could be climbed. A doctor and physiologist, Griffith Pugh revolutionised almost every aspect of British high-altitude mountaineering, transforming the climbers’ attitude to oxygen, the clothes they wore, their equipment, fluid intake and acclimatisation. Yet, far from receiving the acclaim he was due, he was met with suspicion and ridicule. His scientific contributions were, quite simply, at odds with old-fashioned notions of derring-do and the gentlemanly amateurism that dogged the sport. Later in his career, his impact in helping athletes enhance their performance lasts to this day in the fields of cycling, swimming and running. This insightful biography shows Pugh to be troubled, abrasive, yet brilliant. Eight years in the writing, closely researched, and told with unflinching honesty by Pugh’s daughter, Harriet Tuckey, Everest – The First Ascent is the compelling portrait of an unlikely hero.

On the morning of 2 June 1953, the day of Queen Elizabeth’s coronation, the first news broke that Everest had finally been conquered. Drawing on first-hand interviews and unprecedented access to archives, this is a ground-breaking new account of that extraordinary first ascent. Revealing that what has gone down in history as a supremely well-planned expedition was actually beset by crisis and controversy, Everest 1953 recounts a bygone age of self-sacrifice and heroism, using letters and personal diaries to reveal the immense stress and heartache the climbers often hid from their fellow team members. Charting how the ascent affected the original team in subsequent years and detailing its immense cultural impact today, Everest 1953 is the perfect book to commemorate this remarkable feat of the human will.

"With nimble words and a straightforward style, New Zealand mountaineering legend Hillary recollects the bravery and frustration, the agony and glory that marked his Everest odyssey. From the 1951 expedition that led to the discovery of the southern route, through the grueling Himalayan training of 1952, and on to the successful 1953 expedition led by Colonel John Hunt, Hillary conveys in precise language the mountain's unforgiving conditions. In explicit detail he recalls an Everest where chaotic icefalls force costly detours, unstable snow ledges promise to avalanche at the slightest misstep, and brutal weather shifts from pulse-stopping cold to fiendish heat in mere minutes.".

"What transformed pure physical delight into something deeper was the fact that no-one had been here before..." Discover the fascinating stories of the men and women who have scaled the world's highest peaks. Featuring accounts of some of the world's most treacherous mountain climbs, this amazing collection covers the ascent of Mont Blanc in the 1780s, the golden age of alpine climbing which saw the Matterhorn and the Bietschhorn conquered, as well as the climbing of the great summits of the Americas and the Himalayan peaks, Everest and Annapurna. First Ascent is a unique survey of human achievement and a tribute to the adventurous spirit of mountaineers past and present.

Celebrating the sixtieth anniversary of the first ascent to Mount Everest's peak, photographs from the climber's personal collection display the landscapes and difficulties faced by the team before finally reaching the summit. 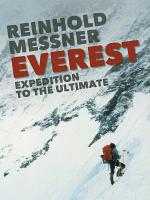 'Everest by fair means - that is the human dimension, and that is what interests me ... In reaching for the oxygen cylinder, a climber degrades Everest ... a climber who doesn't rely on his own strength and skills, but on apparatus and drugs, deceives himself. In May 1978 Reinhold Messner and Peter Habeler became the first climbers in history to reach the summit of Mount Everest without the use of supplementary oxygen - an event which made international headlines and permanently altered the future of mountaineering. Here Messner tells how the and Habeler accomplished the impossible - and how it felt. He describes the dangers of the Khumbu Icefield, the daunting Lhotse flank, two lonely storm-filled nights at 26,247 feet, and finally the last step to the summit. Everest: Expedition to the Ultimate is a riveting account of the exhaustion, the exhilaration and the despair of climbing into the death zone. The book also includes a history of the mountain, successful ascents and Messner's reflections on recent tragedies on Mount Everest. Reinhold Messner was the first to climb all fourteen peaks higher than 8,000 metres. The author of more than a dozen books on his adventures, he lives in a castle in northern Italy.

At 8am on 29 May 1999, Cathy O'Dowd, a 30-year-old mountaineer from South Africa, stepped onto the summit of Everest and into history. She had become the first woman to climb the highest mountain in the world from both its south (Edmund Hillary) and north (George Mallory) sides. To achieve this, Cathy has had to face the ultimate risks of Everest. During her first ascent from the south in 1996, she and her team were trapped in the killer storm described in Jon Krakauer's best seller Into Thin Air. They finally reached the summit, only to have the thrill of success snatched away when a team member disappeared on the descent. In 1998 Cathy, attempting the north side of Everest, stopped only a few hundred metres from the summit to try and help a dying American climber. The woman's first words were 'don't leave me'. Yet Cathy eventually had to leave her to save her own life. Now Cathy has captured the drama of her Everest climbs, her passion for the challenge of climbing mountains and her love for wild places in this story of her four attempts on the mountain. Cathy tries to answer the question of why, if climbing Everest can be so dangerous, people still want to do it. In a new chapter, Cathy shares the previously untold story of her fourth Everest expedition, an attempt to climb a new route on the seldom visited and very risky east face of Everest. Storms, avalanches and crevasses all contributed to an expedition fraught with difficulty. This is a book of challenge, of adventure, of love and life and death. This is Everest, the world's highest mountain, climbed 'just for the love of it'.

60 years after the first ascent of Mount Everest, this book of letters celebrates, in a very personal way, this most majestic of mountains. With exclusive access to the private archives of pioneering New Zealand climber George Lowe, this is a welcome tribute to an unsung hero.

The First New Zealand Himalayan Expedition, in 1951, was initiated by Earle Riddiford, who with Ed Cotter and Pasang Dawa Lama made the first ascent of Mukut Parbat, their target peak in the Garhwal Himalaya. Accompanying them on that expedition, though not to that summit, were two other New Zealand climbers, Edmund Hillary and George Lowe. Hearing of the success on Mukut Parbat, the New Zealand Alpine Club suggested to the Alpine Club in London that acclimatized New Zealanders would be a valuable asset on the forthcoming 1951 British Reconnaissance of Mt Everest, to be led by Eric Shipton. This resulted in an invitation for two New Zealanders to join the party: thrilling news the four climbers received while they were ensconced in the hill-country village of Ranikhet. A day and a half of bitter dispute rent the party asunder. Which two should go to Everest? In this enthralling narrative, journalist Lyn McKinnon tells the stories of Earle Riddiford and Ed Cotter, two extraordinary New Zealanders whose climbing achievements were forever eclipsed by the exploits of others.