This third fascicle of Babylonian Planetary Omens contains the edition of all cuneiform texts dealing with the planet Venus known to us. Most of these tablets are kept in the British Museum; the large number of unpublished texts were transliterated and the previously published texts were checked and collated from the originals. The texts are accompanied by translations, and each group of texts is commented upon by David Pingree from the point of view of the text history and astronomical significance. A general introduction, also by David Pingree, analyzes the descriptions of Venus that occur in the texts in terms of astronomical phenomena. Indices are included to facilitate the study of this large corpus. 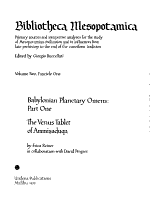