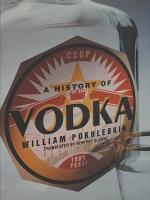 With formidable scholarship and considerable dry wit, William Pokhlebkin, one of Russia's best-known historians sets out on the detective trail. His aim: to reveal the strange truth about his country's most famous tipple. The result is a triumph of historical deduction.

With formidable scholarship and considerable dry wit, William Pokhlebkin, one of Russia's best-known historians sets out on the detective trail. His aim: to reveal the strange truth about his country's most famous tipple. The result is a triumph of historical deduction.

Russia is famous for its vodka, and its culture of extreme intoxication. But just as vodka is central to the lives of many Russians, it is also central to understanding Russian history and politics. In Vodka Politics, Mark Lawrence Schrad argues that debilitating societal alcoholism is not hard-wired into Russians' genetic code, but rather their autocratic political system, which has long wielded vodka as a tool of statecraft. Through a series of historical investigations stretching from Ivan the Terrible through Vladimir Putin, Vodka Politics presents the secret history of the Russian state itself-a history that is drenched in liquor. Scrutinizing (rather than dismissing) the role of alcohol in Russian politics yields a more nuanced understanding of Russian history itself: from palace intrigues under the tsars to the drunken antics of Soviet and post-Soviet leadership, vodka is there in abundance. Beyond vivid anecdotes, Schrad scours original documents and archival evidence to answer provocative historical questions. How have Russia's rulers used alcohol to solidify their autocratic rule? What role did alcohol play in tsarist coups? Was Nicholas II's ill-fated prohibition a catalyst for the Bolshevik Revolution? Could the Soviet Union have become a world power without liquor? How did vodka politics contribute to the collapse of both communism and public health in the 1990s? How can the Kremlin overcome vodka's hurdles to produce greater social well-being, prosperity, and democracy into the future? Viewing Russian history through the bottom of the vodka bottle helps us to understand why the "liquor question" remains important to Russian high politics even today-almost a century after the issue had been put to bed in most every other modern state. Indeed, recognizing and confronting vodka's devastating political legacies may be the greatest political challenge for this generation of Russia's leadership, as well as the next.

“A operatic tour-de-force.” —Tilar J. Mazzeo, author of The Widow Clicquot “An impressive feat of research, told swiftly and enthusiastically.” —San Francisco Chronicle From Vanderbilt and Rockefeller to Bill Gates and Steve Jobs, America’s captains of industry are paragons of entrepreneurial success, and books about business history, from The First Tycoon to The Big Short, show exemplars of capitalistic cunning and tenacity…but just as American cocktail connoisseurs can mistake Absolut, Skyy, Grey Goose, or Ketel One for the quintessential clear spirit, so too has America’s vision of business history remained naïve to a truth long recognized in Eastern Europe: since the time of Tsar Nicholas, both vodka and commercial success have been synonymous in Russia with one name—Smirnoff. Linda Himelstein’s critically acclaimed biography of Russian vodka scion Pyotr Smirnov—a finalist for the James Beard Award, winner of the IACP and Saroyan Awards, and a BusinessWeek Best Business Book of 2009—is the sweeping story of entrepreneurship, empire, and epicurean triumph unlike anything the world has ever seen before.

Vodka is the most versatile of spirits. While people in Eastern Europe and the Baltic often drink it neat, swallowing it in one gulp, others use it in cocktails and mixed drinks—bloody marys, screwdrivers, white russians, and Jell-O shots—or mix it with tonic water or ginger beer to create a refreshing drink. Vodka manufacturers even infuse it with flavors ranging from lemon and strawberry to chocolate, bubble gum, and bacon. Created by distilling fermented grains, potatoes, beets, or other vegetables, this colorless, tasteless, and odorless liquor has been enjoyed by both the rich and the poor throughout its existence, but it has also endured many obstacles along its way to global popularity. In this book, Patricia Herlihy takes us for a ride through vodka’s history, from its mysterious origins in a Slavic country in the fourteenth century to its current transatlantic reign over Europe and North America. She reveals how it continued to flourish despite hurdles like American Prohibition and being banned in Russia on the eve of World War I. On its way to global domination, vodka became ingrained in Eastern European culture, especially in Russia, where standards in vodka production were first set. Illustrated with photographs, paintings, and graphic art, Vodka will catch the eye of any reader intrigued by how “potato juice” became an international industry.

This is a study of the social, economic, and political role of Vodka in nineteenth-century Russia. Since the `Green Serpent' first appeared in sixteenth-century Muscovy, it has played a vital part in Russian life. Vodka became an essential part of Russian working-class celebrations: personal, religious, and commercial. Trade in Vodka redistributed wealth upwards through Russian society over several centuries. Indeed, Russia's status as a great power was underpinned by it: by the nineteenth century, it generated one-third of government revenue - enough to cover most of the costs of the vast army. The dependence on Vodka of both people and state has endured into the Gorbachev era. But despite Vodka's key role in Russian history, and the complex network of corruption associated with it, the subject has been ignored by most historians until now. This study concentrates on an important transitional era in the history of Vodka: the early nineteenth century. During this period, Vodka taxes played the role that salt taxes had played in the ancien r--eacute--;gime in France. The abolition of the tax farm in 1863 should be seen as one of the most important of the `Great Reforms' of the 1860s, an era which, in many ways, parallels the glasnost of the 1980s.

Explores the history of vodka, describes the distilling process, and rates sixty varieties and brands for flavor and quality 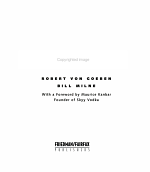 Featuring recipes for vodka-based drinks and dishes, this guide also includes a complete, cross-cultural history of vodka, with information on production, brands, and popularity throughout the world. Color photos.

Trommelen explores all facets of the Russian obsession with vodka. Peering chiefly through the lenses of history and literature, he offers up an appropriately complex and rich portrait. 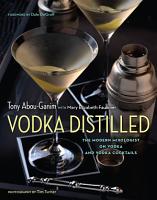 Over the course of the past two decades, Tony Abou-Ganim has earned his reputation as one of the leaders of the craft cocktail movement. Through his work with food and hospitality legends like Mario Batali, Steve Wynn, and Harry Denton, Abou-Ganim has earned his reputation as "the Modern Mixologist," someone bringing the traditional art of mixology into the 21st century for the benefit of new generations. On the heels of the success of The Modern Mixologist: Contemporary Classic Cocktails, Tony Abou-Ganim has written Vodka Distilled as a companion piece focusing entirely on this clear spirit. It is a comprehensive look at the vodka marketplace, geared toward those working in the profession as well as the giant audience of vodka drinkers. This one-of-a-kind resource establishs a new standard in defining and understanding the world's most consumed spirit. Vodka Distilled appeal to both enthusiasts and aficionados by explaining how traditional-style vodkas—those produced in Eastern Europe—differ in character from those made in the West, and how different raw materials and distillation and filtration methods contribute to these variations in character. By breaking down the characteristics of each highlighted vodka, Abou-Ganim helps readers better understand, appreciate, and enjoy this noble spirit.

Herlihy examines the prevalance of alcohol in Russian social, economic, religious & political life. She looks at how the state, church, military, doctors & the czar tried to battle the problem of over-consumption of alcohol in the imperial period.