Written by experts in the field, this dictionary covers all aspects of film studies, including terms, concepts, debates, and movements in film theory and criticism, national, international and transnational cinemas, film history, film movements and genres, film industry organizations and practices, and key technical terms and concepts in 500 detailed entries. Most entries also feature recommendations for further reading and a large number also have web links. The web links are listed and regularly updated on a companion website that complements the printed book. The dictionary is international in its approach, covering national cinemas, genres, and film movements from around the world such as the Nouvelle Vague, Latin American cinema, the Latsploitation film, Bollywood, Yiddish cinema, the spaghetti western, and World cinema. The most up-to-date dictionary of its kind available, this is a must-have for all students of film studies and ancillary subjects, as well as an informative read for cinephiles and for anyone with an interest in films and film criticism. 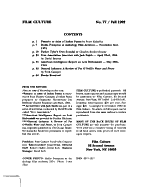 This book follows the hybrid and contradictory history of magic realism through the writings of three key figures – art historian Franz Roh, novelist Alejo Carpentier, and cultural critic Fredric Jameson – drawing links between their political, aesthetic, and philosophical ideas on art’s relationship to reality. Magic realism is vast in scope, spanning almost a century, and is often confused with neighbouring styles of literature or art, most notably surrealism. The fascinating conditions of modernist Europe are complex and contradictory, a spirit that magic realism has taken on as it travels far and wide. The filmmakers and writers in this book acknowledge the importance of feeling, atmosphere, and mood to subtly provoke and resist global capitalism. Theirs is the history of magic-realist cinema. The book explores this history through the modernist avant-garde in search of a new theory of cinematic magic realism. It uncovers a resistant, geopolitical form of world cinema – moving from Europe, through Latin America and the former Soviet Union, to Thailand – that emerges from these ideas. This book is invaluable to any reader interested in world modernism(s) in relation to contemporary cinema and geopolitics. Its sustained analysis of film as a sensory, intermedial medium is of interest to scholars working across the visual arts, literature, critical theory, and film-philosophy.

This is the first book in any language on the films of Konrad Wolf (1925-1982), East Germany's greatest filmmaker, and puts Wolf in a larger European filmic and historical context.

Exploring the work of three visionary auteurs deeply invested in the political possibilities of film.

In Utopian Ruins Jie Li traces the creation, preservation, and elision of memories about China's Mao era by envisioning a virtual museum that reckons with both its utopian yearnings and its cataclysmic reverberations. Li proposes a critical framework for understanding the documentation and transmission of the socialist past that mediates between nostalgia and trauma, anticipation and retrospection, propaganda and testimony. Assembling each chapter like a memorial exhibit, Li explores how corporeal traces, archival documents, camera images, and material relics serve as commemorative media. Prison writings and police files reveal the infrastructure of state surveillance and testify to revolutionary ideals and violence, victimhood and complicity. Photojournalism from the Great Leap Forward and documentaries from the Cultural Revolution promoted faith in communist miracles while excluding darker realities, whereas Mao memorabilia collections, factory ruins, and memorials at trauma sites remind audiences of the Chinese Revolution's unrealized dreams and staggering losses.

The present collection of essays brings into dialogue Pier Paolo Pasolini (1922–1975) and Rainer Werner Fassbinder (1945–1982) by comparing their cultural and intellectual legacy. Pasolini and Fassbinder are amongst the last radical filmmakers to have emerged in Europe. Born in Italy and Germany, they inherited a traumatic social and political past which is reflected in their works through a number of similarly articulated and unresolved tensions: high and popular cultures, theatre, literature and cinema, ideology and narration, major and minor codes of expression. The essays in this book examine the uncompromising character of Pasolini’s and Fassbinder’s films. Constantly oscillating between utopia and nihilism, these works invite us to reconsider subjective and collective questions which from today’s perspective seem lost forever.

Like David James' earlier collection of essays, Power Misses: Essays Across (Un)Popular Culture (1996), the present volume, Power Misses II: Cinema, Asian and Modern is concerned with popular cultural activity that propose alternatives and opposition to capitalist media. Now with a wider frame of reference, it moves globally from west to east, beginning with films made during the Korean Democracy Movement, and then turning to socialist realism in China and Taiwan, and to Asian American film and poetry in Los Angeles. Several other avant-garde film movements in L.A. created communities resistant to the culture industries centered there, as did elements in the classic New York avant-garde, here instanced in the work of Ken Jacobs and Andy Warhol. The final chapter concerns little-known films about communal agriculture in the Nottinghamshire village of Laxton, the only one where the medieval open-field system never suffered enclosure. This survival of the commons anticipated resistance to the extreme and catastrophic forms of privatization, monetization, and theft of the public commonweal in the advanced form of capitalism we know as neoliberalism.

Critics hailed previous editions of Visionary Film as the most complete work written on the exciting, often puzzling, and always controversial genre of American avant-garde film. This book has remained the standard text on American avant-garde film since the publication of its first edition in 1974. Now P. Adams Sitney has once again revised and updated this classic work, restoring a chapter on the films of Gregory J. Markopoulos and bringing his discussion of the principal genres and major filmmakers up to the year 2000.

Few literary phenomena are as elusive and yet as persistent as realism. While it responds to the perennial impulse to use literature to reflect on experience, it also designates a specific set of literary and artistic practices that emerged in response to Western modernity. Landscapes of Realism is a two-volume collaborative interdisciplinary exploration of this vast territory, bringing together leading-edge new criticism on the realist paradigms that were first articulated in nineteenth-century Europe but have since gone on globally to transform the literary landscape. Tracing the manifold ways in which these paradigms are developed, discussed and contested across time, space, cultures and media, this first volume tackles in its five core essays and twenty-five case studies such questions as why realism emerged when it did, why and how it developed such a transformative dynamic across languages, to what extent realist poetics remain central to art and popular culture after 1900, and how generally to reassess realism from a twenty-first-century comparative perspective.